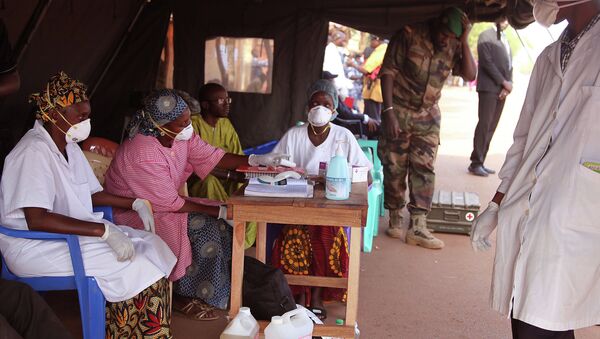 UNITED NATIONS, November 22 (Sputnik) – UN Secretary General Ban Ki-moon has asked for a UN support mission to be established in Mali as quickly as possible after the World Health Organization announced that all six Ebola virus patients in Mali have died.

"I have instructed the head of UNMEER [UN Mission for Ebola Emergency Response], Tony Banbury, to establish on an urgent basis a United Nations support mission in Mali," Ban Ki-moon said Friday, adding that "the new chain of transmission in Mali is a cause of deep concern".

The Secretary General stressed that the United Nations "will continue to scale up our response until the very last case of Ebola is identified and treated".

Earlier on Friday, Ban Ki-moon told reporters that global efforts to halt the spread of Ebola are beginning to work in West Africa, but transmission rates are increasing in some areas.

According to the World Health Organization (WHO), Ebola has infected more than 15,000 people in West Africa, of whom more than 5,000 have died, mostly in the worst-affected countries of Guinea, Liberia and Sierra Leone. Some cases have been reported in other parts of Africa, Europe and North America.