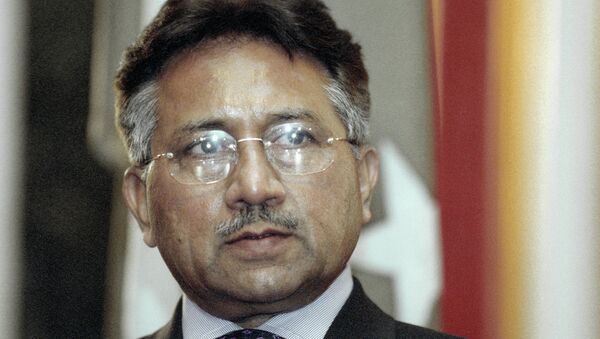 © Sputnik / Sergei Guneev
Subscribe
A Pakistan special tribunal has accepted the request of former president Pervez Musharraf to try his alleged co-conspirators. The court's decision to involve high ranking officials from Musharraf's cabinet has already led to the resignation of Zahid Hamid, who was serving as Minister for Science and Technology.

MOSCOW, November 21 (Sputnik), Ekaterina Blinova — A Pakistan special tribunal has accepted the request of former president Pervez Musharraf who is charged with treason to include a list of 'alleged co-conspirators' in the trial against him.

"The court has decided that then prime minister Shaukat Aziz, then law minister Zahid Hamid and then chief justice of Pakistan Abdul Hameed Dogar will be included in the investigation but Musharraf’s request to include a number of top military leaders was not accepted," Agence France-Presse reported.

Pervez Musharraf, accused of "subverting and circumventing" the Pakistani Constitution by imposing a state of emergency on November 3, 2007 dismisses the charges.

Citing the former president's proclamation, issued on November 3, 2007, Dawn, a Pakistani media outlet, stated that Musharraf imposed the state of emergency "after consulting the then prime minister, the governors of all four provinces and the chairman of joint chiefs of staff committee, the chiefs of the armed forces, the vice-chief of army staff and the corps commanders of the Pakistan Army."

The court's decision to involve Musharraf's "aiders and abettors" means that a number of high officials and military personnel may be implicated during the treason trial. Notable on the list is Zahid Hamid, who was serving as the Minister for Science and Technology in the government of current Prime Minister Nawaz Sharif. The court refused to launch a criminal probe against any high-ranking military officers.

"Based on the material on record, the probability of their involvement as aiders and abettors cannot be ruled out. We are therefore of the view that joinder of the then prime minister and the then federal law minister is necessary to secure the ends of justice," the tribunal stated as quoted by Agence France-Presse.

Pakistan Today reports that after the announcement of the court's orders Zahid Hamid immediately resigned from his post.

Musharraf, tried for four cases including assassinations of Benazir Bhutto, a former premier and Akbar Bugti, a Baloch nationalist leader, could face life imprisonment or the death penalty.