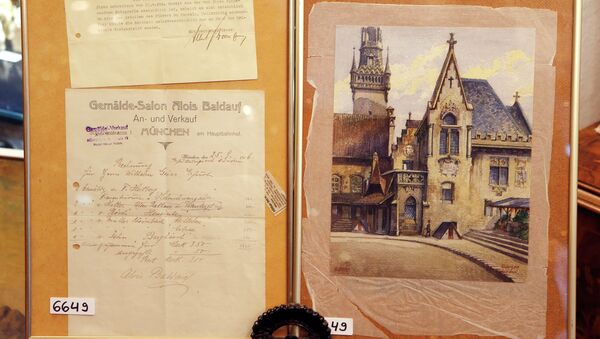 © AP Photo / Michael Probst
Subscribe
A watercolor painting by a young Adolf Hitler during his time as a struggling artist is expected to sell for at least $60,000 at auction in Nuremburg this weekend, the Associated Press reports.

MOSCOW, November 21 (Sputnik) — A 100-year-old watercolor of Munich’s old city hall by a young Adolf Hitler is expected to draw at least $60,000 at an auction in Nuremburg this weekend, the Associated Press reports.

The piece, called “The Old City Hall”, being sold at the Weidler auction house, has drawn interest from investors and collectors looking at the piece as a historical curiosity, says Weidler’s director Katherin Weidler. She notes that while the piece is “perfectly well done…I’d rate its artistic value as fairly minimal,” AP quoted her as saying.

The painting is being sold by a pair of elderly sisters, whose grandfather purchased the painting in 1916. The painting will include the original bill of sale, as well as a letter signed by Albert Bormann, brother of Hitler’s future private secretary Martin Bormann, confirming that the painting appears to be “one of the works of the Fuehrer.”

The painting is one of an estimated 2,000 by the future German Fuehrer, painted during his time as a struggling artist. The Weidler auction house has sold several pieces by Hitler over the past decade.