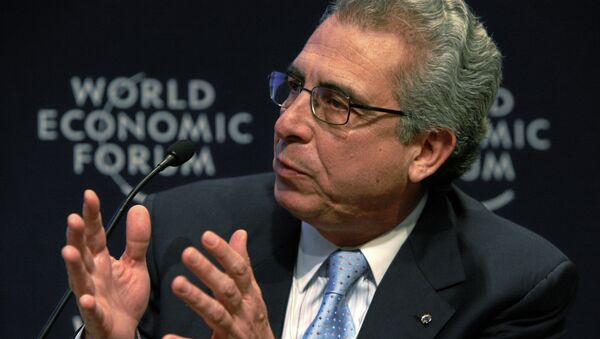 NEW YORK, November 21 (Sputnik) — Sanctions against Iran have hurt ordinary people and had little impact on those who hold power in the country, Mexico’s former president Ernesto Zedillo said in a joint statement with former UN Secretary-General Kofi Annan and former President of Finland Martti Ahtisaari on Friday.

“The long-suffering Iranian people and business sector deserve the relief from sanctions that a comprehensive agreement should bring. The sanctions have hurt ordinary people without damaging the interests of those who hold power,” Zedillo said in a statement released by The Elders, a group of global leaders and peace activists formed by Nelson Mandela in 2007.

“The sanctions regime against Iran will need to be addressed quickly, and with a high sense of responsibility by all concerned,” Zedillo noted.

Former UN Secretary-General Kofi Annan and chairman of the group said in the statement that “the progress that Iran and the six world powers (P5+1) have made on issues that originally seemed insoluble has been remarkable” and “after so much hard work, it would be a lost opportunity of historic proportions if they could not complete the last uphill stretch on the road to a positive outcome”.

Nobel Peace Laureate and former President of Finland Martti Ahtisaari added that “a nuclear agreement is a first step in the efforts to find solutions to the problems in the Middle East”.

The latest round of Tehran’s talks with the P5+1 group, comprising the permanent members of the UN Security Council – Russia, the United States, Britain, France, China – plus Germany, began in Vienna on Tuesday.

Iran says its nuclear program is peaceful and aimed at meeting the country's energy needs, but the West suspects Tehran of trying to develop weapons under the guise of a civilian nuclear program. Iran’s earlier nuclear activities triggered several rounds of sanctions by the UN Security Council, the European Union, the United States and a number of other nations.

Last year, the P5+1 group agreed to reach a long-term deal with Tehran guaranteeing the peaceful nature of its nuclear program by July 2014. The deadline was later moved to November 24.