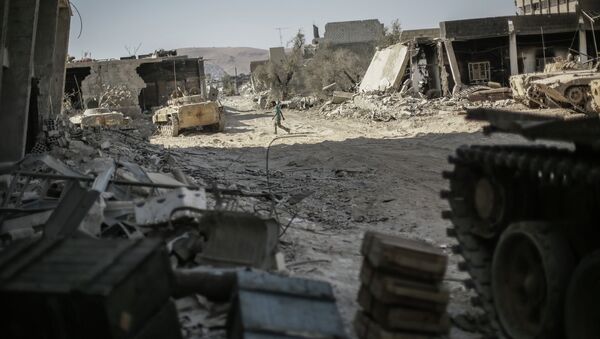 Syria is working with the Organisation for the Prohibition of Chemical Weapons (OPCW) on the elimination of chemical weapons.

MOSCOW, November 21 (Sputnik) — Syria’s government is working constructively with the Organisation for the Prohibition of Chemical Weapons (OPCW) and the United Nations’ on the elimination of chemical weapons in the country, special coordinator of the OPCW-UN Joint Mission in Syria Sigrid Kaag told Sputnik News Agency on Friday.

"The Syrian government was always constructively cooperative with the joint mission from start to finish of our work," Kaag said, commenting on a recent statement by Syria’s ambassador to the UN that Syria is cooperating with the OPCW to solve all the remaining technical issues.

"We still have ongoing dialogue with technical experts on serious initial declaration to the convention on these amendments and implementation to destroy 12 production facilities is also ongoing," she added.

At a United Nations Security Council briefing earlier in November, Kaag stated that the destruction of Syria's remaining chemical weapons production facilities will begin this month and should be completed next year.

In August 2013, an unprecedented chemical attack which killed nearly 1,500 civilians took place in Ghouta, a suburb of the Syrian capital Damascus. Militants and the Syrian government blamed each other for the attack.

Following a breakthrough deal, brokered by Russian Foreign Minister Sergei Lavrov and US Secretary of State John Kerry in September 2013, Syria agreed to place its chemical weapons under international control for further elimination. Damascus subsequently joined the Chemical Weapons Convention and handed over documents on its arsenal to the OPCW.

In October 2014, the OPCW announced that a total of 97.8 percent of chemicals removed from Syria earlier this year had been destroyed.