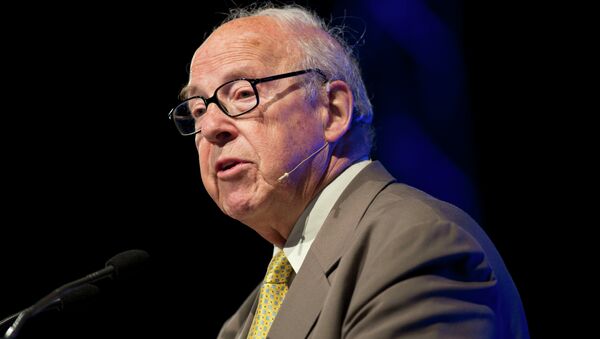 © Fotobank.ru/Getty Images / David Levenson
Subscribe
Swedish diplomat and former head of the International Atomic Energy Agency (IAEA) Hans Blix supposed that withdrawal of American nuclear weapons from the European countries and transfer Russian nuclear weapons further east could help to improve situation with Ukraine, but it could not happen in near future.

MOSCOW, November 21 (Sputnik) — A part of the solution to the crisis in Ukraine should be the withdrawal of US nuclear weapons from Europe and the transfer of Russian nuclear weapons further east, Swedish diplomat and former head of the International Atomic Energy Agency (IAEA) Hans Blix told Sputnik News Agency on Friday.

“It couldn’t happen today, of course not, but what I’m saying is that if we have a détente, if we have a result after the Ukrainian affair is over, and it’s not over, at that détente I think this should be reconsidered. As I think there should be a reconsideration of the CFE [Treaty on Conventional Armed Forces in Europe], the conventional forces agreement that was reached in the early 90s,” he told Sputnik News Agency.

“It was a great agreement that reduced military forces everywhere, reduced the cost of conventional weapons, that’s where we should go. That’s where many of us in Western Europe want to go, we think that the present situation is horrible and we should get back to détente,” Blix added.

There is no official data on the number of US nuclear weapons in Europe, but according to the Federation of American Scientists, some 180 of the United States’ B61 tactical nuclear bombs are deployed in five European countries, namely Belgium, the Netherlands, Germany, Italy, and Turkey.

The crisis in Ukraine's eastern regions escalated when Kiev authorities launched a military operation against independence supporters in eastern Ukraine in mid-April. The conflicting sides reached a ceasefire agreement at a September 5 meeting of the trilateral Contact Group on Ukraine in Minsk.

A memorandum specifying the implementation of the ceasefire was adopted at another Contact Group meeting on September 19. Both sides have subsequently accused each other of violating the truce.