Yen Rallies Against the Dollar After Record Low 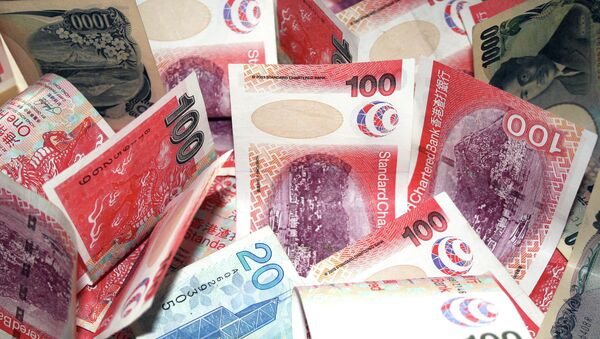 The yen has halted its sharp decline against the dollar, although its longer-term weakness is set to continue.

MOSCOW, November 21 (Sputnik) — The yen has rallied against the dollar in the wake of a warning from the Japanese finance minister that the pace of the yen’s depreciation was sharper than desired.

“Over the past week, the yen-dollar rate has weakened too fast — that’s clear,” Bloomberg reports Taro Aso as having said in Tokyo. “It’s up to the market to set the currency rate and it’s not something where we intervene. Sudden currency changes aren’t welcome, whether it’s up or down.”

Wednesday’s rise in the dollar above the 118 yen mark was the first time in seven years it has reached the 118 level, after climbing about 10 yen in a month. According to Bloomberg, the decline represented sharpest five-week drop in the yen since 1995.

“I wouldn’t have been surprised to hear comments like those made by Aso earlier,” Kengo Suzuki, chief currency strategist at Mizuho Securities Co. in Tokyo, told Bloomberg. “They would act as a floor for the yen. We could see a correction in dollar-yen down to around 115.”

Despite Friday’s rally, analysts believe that the trend is nonetheless for the dollar to maintain its strength against the yen, amid economic recovery in the US and an associated rise in interest rates.

Minoru Uchida, head of Tokyo global market research at the Bank of Tokyo-Mitsubishi UFJ, told Nikkei Asia Review, "The market is dominated by strong anticipation of a weaker yen."

The quantitative easing policy carried out by the Bank of Japan last month led to a trend to sell the yen, and last Saturday, sources at the BoJ told Kyodo the monetary policy was to stay in place, a continuation of monetary easing steps undertaken since April 2013 with the aim of tackling deflation.