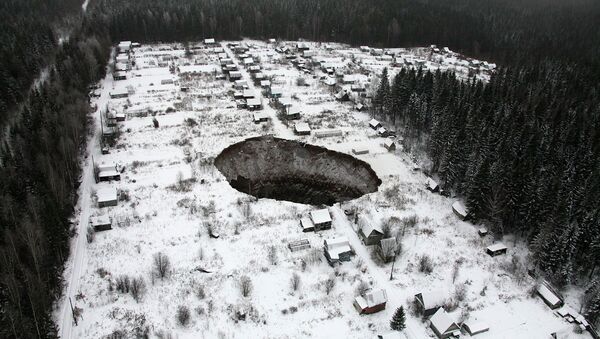 A sinkhole near one of the mines in Russia’s Ural Mountains belonging to Russia’s biggest potash miner, Uralkali, appears to be growing in size and is already larger than previously estimated; the company is continuing to monitor the site of the geographic anomaly.

The sinkhole was first detected on Tuesday, but at the time, the size of the hole in the earth and the scale of its destruction were thought to be a lot less. Uralkali continued to monitor the site together with geologists.

"The company continues to work closely with the relevant state authorities and scientific experts,” Uralkali CEO Dmitry Osipov said in a statement issued via the official website of the company.

“The accident is not catastrophic to the company’s operations or people living in the area. The impact is being localized and we have a clear plan to tackle the situation promptly. We will take all necessary measures to minimize the impact of the incident on the company, our investors, partners and the inhabitants of Solikamsk and the surrounding area.” 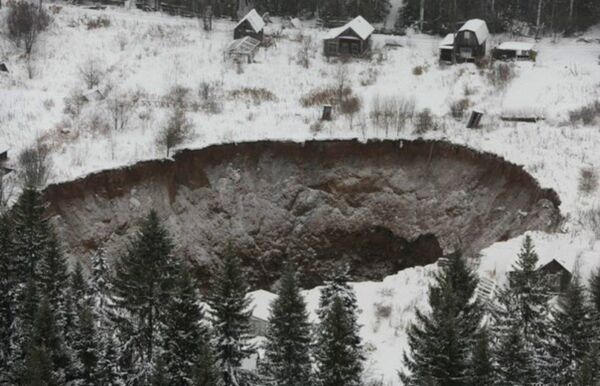 A sinkhole near one of the mines in Russia’s Ural Mountains belonging to Russia’s biggest potash miner, Uralkali, appears to be growing in size and is already larger than previously estimated.
© Photo : Uralkali press service

However the pictures of the sinkhole released by the company now illustrate the true scale of the accident. The collapse, in fact, happened in the very middle of a seasonal cottage community and virtually swallowed up some of the wooden houses.

Before the giant hole appeared, the company had evacuated workers from its the Solikamsk-2 mine, due to the inflow of saline water. Operations at the site have been halted, and the level of underground water is now being monitored.

The company says Solikamsk-2 is connected to another mine, Solikamsk-1. The underground tunnels linking the two were walled up decades ago, but local residents fear water would only need time to break through.

The town of Solikamsk is located almost entirely above the Solikamsk-1 mine, the local media source v-kurse.ru quoted the town's mayor Sergey Devyatkov as saying.  “If the mine is flooded, the whole town would have to be evacuated.

The same mine had previously collapsed in January 1995, causing gas explosions in surrounding areas the following day.

Alexander Baryakh, General Director of the Mining Institute of the Urals Branch of the Russian Academy of Science thinks the two accidents are interconnected.

“The site where the inflow of brine has been detected completely overlaps with the site of the incident which happened at Silvinit Solikamsk-2 on 5 January 1995. This enables us to conclude that the 1995 accident and its consequences are directly linked to the accident which took place on 18 November 2014,” he announced via a statement on the Uralkali website.