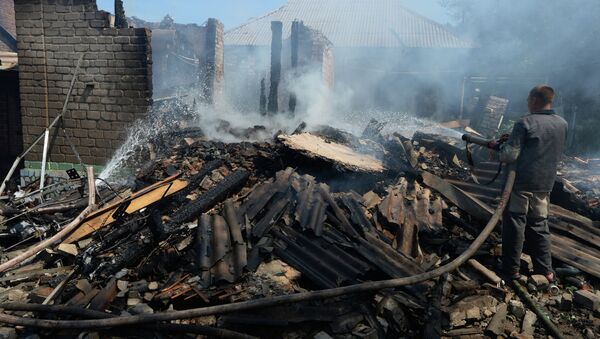 © Sputnik / Mikhail Voskresenskiy
/
Go to the photo bank
Subscribe
A recent United Nations report covers the situation in Ukraine, stating that the use of cluster bombs and mass executions in war-torn Donbas may be considered war crimes.

MOSCOW, November 20 (Sputnik) – The use of cluster bombs in eastern Ukraine is a violation of international humanitarian law and may be considered a war crime, a recent UN report on the human rights situation in Ukraine said.

“The reports on the use of cluster munitions in the hostilities in both urban and rural areas are a matter of concern. Due to their wide radius and indiscriminate impact, their use in areas with a civilian presence would constitute a violation of international humanitarian law and may amount to a war crime,” the report published on November 15 reads.

Cluster munitions contain dozens or hundreds of submunitions, which spread over a wide area, endangering anyone in the vicinity. So far, 114 countries have joined a UN treaty banning such munitions. Ukraine is not a party to the agreement.

In October, Human Rights Watch released a report that supported the claims of the Donetsk and Luhansk people’s republics that Ukrainian troops used cluster munitions in residential areas. The organization added that cluster munitions were used in the October 2 shelling of Donetsk by Ukrainian forces that killed an employee of the International Committee of the Red Cross.

Signs of summary executions have been found in two of three mass graves in eastern Ukraine’s Donetsk Region, a recent UN report on the human rights situation in Ukraine said.

“One grave contained five bodies; two further graves found on the territory ‘Komunarska’ No. 22 mine contained two bodies each. The bodies in the first grave were identified as members of the armed groups, killed in action. With regard to the four bodies found in the two graves, there are allegations of forensic evidence of a summary execution, according to the ‘Donetsk people’s republic,’” the report published on November 15 reads.

The mass graves were reported on September 23 near the village of Nyzhnia Krynka outside the city of Donetsk. Independence supporters of southeastern Ukraine claim that the massacre was carried out by fighters from Ukraine’s National Guard, who were staying in the area since April, when Kiev launched a military operation in the region. Ukrainian authorities have denied the accusation.

Russian President Vladimir Putin and head of the Organization for Security and Co-operation in Europe Didier Burkhalter have called for a thorough investigation into the mass graves. In October, the Russian Investigative Committee claimed it has irrefutable evidence of Ukraine’s National Guard and nationalist group Right Sector’s participation in the mass killings.

A number of provisions of Ukraine’s lustration law contradicts international law on human rights, according to a recent UN report on the human rights situation in Ukraine.

“Lustration,” from the Latin word meaning “purification by sacrifice,” is a measure barring officials of a former regime from holding political or public offices after a change in government.

“Several provisions of the law are questionable from the point of view of their compliance with international standards. The vetting grounds are overly broad in scope and establish a principle of collective responsibility, which is contrary to international human rights law and Recommendation 7568 of the Council of Europe,” the report published on November 15 reads.

According to UN guidelines, “lustration should be administered by ‘a specifically created independent commission of distinguished citizens nominated by the head of State and approved by parliament.’”

“Return to government service would, in some cases, be banned for 10 years while the Guidelines state that disqualification based on lustration should not exceed five years,” the report explains.

“Finally, prohibition from holding office on the sole basis of having occupied certain functions, rather than as a consequence of a proven violation or abuse can be viewed as contravening the presumption of innocence,” the report continues.

In October, Ukrainian President Petro Poroshenko signed a bill on the vetting of officials empowered to perform government functions at the state or regional level. According to Ukrainian Prime Minister Arseniy Yatsenyuk, the screening would affect as many as 1 million Ukrainian officials, including the entire government cabinet, as well as law enforcement personnel.

More than 700 people have been killed in eastern Ukraine since a ceasefire was agreed back in September, according to a recent report by the Office of the United Nations High Commissioner for Human Rights.

"Since the start of the ceasefire, between 6 September and 31 October, at least 718 deaths were reported," the report dated November 15 said.

According to the 49-page document, hostilities in eastern Ukraine is behind the deaths of dozens of women and children, most of whom fell victim to the indiscriminate shelling of residential areas.

"At least 84 women were killed by indiscriminate shelling in Donetsk region. The share of women among casualties reported by medical establishments of Donetsk region remained at the same level as during the peak of hostilities in August (approximately 15%). Between 9 September and 28 October, the number of children killed in Donetsk and Luhansk regions increased by 28%, from 28 to 36 deaths, whilst the number of wounded increased by 82%, from 56 to 102 cases," the report says.

This is the seventh report on the human rights situation in Ukraine. It is based on the work of the UN Human Rights Monitoring Mission in Ukraine (HRMMU) and covers the period from September 17 to October 31.