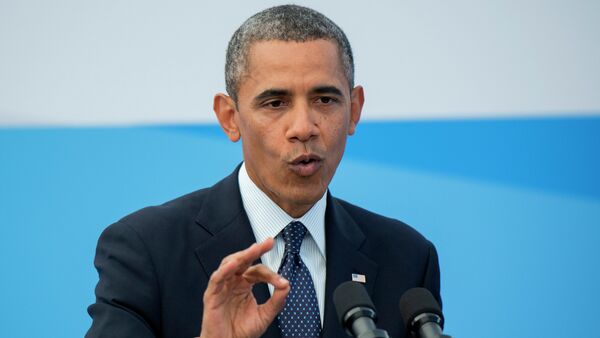 Former US Ambassador to the United Nations Thomas Pickering stated that Barack Obama should take into account the US Senate's threats to block the Iranian nuclear agreement.

WASHINGTON, November 20 (Sputnik) — US President Barack Obama should take into account the US Senate's threats to block the Iranian nuclear agreement in case it does not include complete cessation of Tehran's nuclear enrichment activities, former US Ambassador to the United Nations Thomas Pickering has told Sputnik.

“I think if he [Obama] gets a deal, he has to [consider Senate Democrats]. I think he knows that,” Pickering said on Wednesday.

He referred to the threats made by Democratic Senator Robert Menendez and Republican Mark Kirk last week to challenge any nuclear agreement that does not see Iran abandoning its nuclear program and agreeing to a decades-long inspection and verification regime.

During a Wednesday Atlantic Council event on the upcoming Iran negotiations, Pickering stated that the President will have to continue working with his own Democratic party in order to assure that "if there is an attempt to pass legislation which blocks our implementation, he [Obama] will have to run through the test of the veto."

Obama was already taking the terms presented by Democrats into consideration as early as January of 2014, knowing he would need their support to ratify an agreement, according to Pickering.

Iran’s nuclear program has been a matter of controversy, as the West has accused the country of attempts to develop nuclear weapons under the guise of a civilian nuclear program — the claims Tehran has denied.

The Menendez-Kirk bill, introduced last December, calls for levying new sanctions on Iran, which would thereby change the terms of the nuclear negotiations which promised a relaxation of sanctions. The bill is waiting in the Senate with 59 cosponsors, 17 of which are Democrats.

During talks in Geneva in November 2013, the P5+1 group agreed to reach a deal with Iranian authorities guaranteeing the peaceful nature of the Iranian nuclear program by July. The deadline was subsequently extended to November 24.