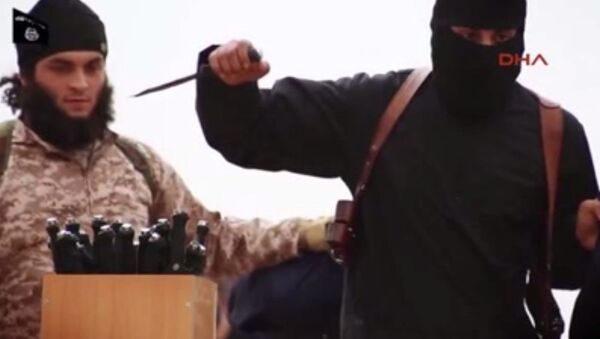 © East News / VISUAL Press Agency
Subscribe
Mickael Dos Santos, a 22-year-old from a Paris suburb who converted to Islam and took the name of Abu Othman, was the second Frenchman, identified in the mass execution video posted by Islamic State (IS).

MOSCOW, November 19 (Sputnik) — A second Frenchman has been identified in the mass execution video posted by Islamic State (IS) militants over the weekend, France's BFMTV channel reported Wednesday, citing sources in the French law enforcement.

The man in the video, which showed the severed head of US aid worker Peter Kassig and the beheading of a dozen Syrian military personnel, is said to be Mickael Dos Santos, a 22-year-old from a Paris suburb who converted to Islam and took the name of Abu Othman. In 2013, he left France for Syria to join the IS insurgency.

Earlier on Wednesday, French President Francois Hollande said in Canberra that there apparently were two Frenchmen in Kassig's execution video. He stressed the roles of the two were still to be determined. This position was echoed by French government spokesman Stephane le Foll, who told BFMTV that Paris could not confirm the identity of the second alleged Frenchman, but said it "seems like" there is another one in the video.

On Monday, government officials said Paris established the identity of a French national, Maxime Hauchard, who was among the IS militants seen in the execution footage. The 22-year-old converted to Islam in 2013 and joined the IS in Syria under the name of Abou Abdallah al-Faransi. Several months ago, Hauchard appeared in a television program talking about his moving to Syria and his current activities.

French prosecutor Francois Molins said earlier that more than 1,100 French citizens, including women and children, are thought to have joined jihadists in their fight against Syrian and Iraqi governments.