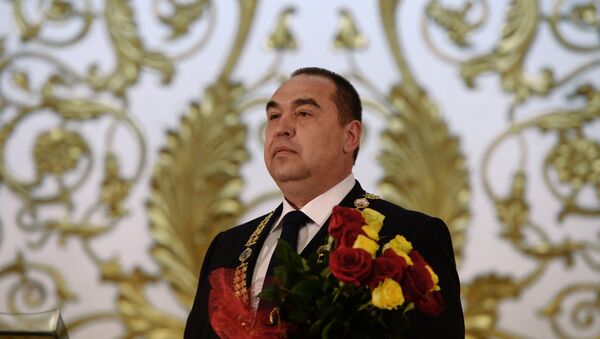 "Let us (following the example of ancient Slavic leaders and glorious Cossack chieftains) get together in a duel. The one who wins will dictate his conditions to the opposite side," the letter circulated by the LPR press service read.

"Our conditions I can declare right now: the immediate termination of any hostilities; the transfer of all legal, semi-legal and illegal Ukrainian armed groups out of the administrative boundaries of the Luhansk and Donetsk regions; the timely start of negotiations between Ukraine on one side and the Luhansk People's Republic, and the Donetsk People's Republic, on the other side," the LPR head continued.

According to Plotnitsky, the self-proclaimed republic "needs nothing beyond that" from Ukraine. "We know perfectly well how difficult life is for Ukrainians right now. Therefore, we are ready to restore all mutually beneficial economic ties with Ukraine right after the ratification of the peace treaty".

"For the fight to be fair, each party has the right to bring along 10 observers and 10 representatives of the media. I do not mind a live broadcast on any TV channel, if you deem it possible. I leave the choice of location and weapon up to you," Plotnitsky added.

Addressing Poroshenko's recent interview with the German Bild newspaper, where the Ukrainian president stated that the country's armed forces are "ready for a scenario of total war" and are in "much better shape than just five months ago", Plotnitsky wrote that this was also the case for the people of Donbas and its militia.

"I am convinced that both the citizens of the Luhansk and Donetsk People's Republics and the entire Ukrainian people, as well as every reasonable person in the world, want peace more than anything," the LPR head said. Instead of "considering the worst case scenarios", Poroshenko should "consider only one, but very good scenario" — getting together for a duel, Plotnitsky stated.

"My proposal is not impulsive, but the result of much forethought… Why stir up mutual hatred and destroy people, the economy, cities? These wounds will take decades to heal for both you and us," he wrote.

"I expect your immediate response, because every hour of delay means more victims, suffering and budget waste, both for the residents of Donbas and the citizens of Ukraine," Plotnitsky concluded.

The crisis in Ukraine's eastern regions escalated when Kiev authorities launched a military operation against independence supporters in eastern Ukraine in mid-April. The conflicting sides reached a ceasefire agreement at a September 5 meeting of the trilateral Contact Group on Ukraine in Minsk. A memorandum specifying the implementation of the ceasefire was adopted at another Contact Group meeting on September 19. Both sides have subsequently accused each other of violating the truce.