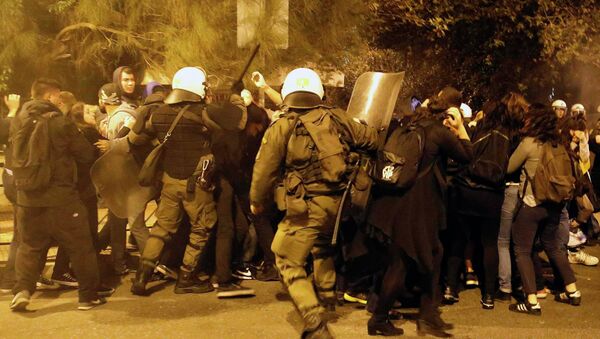 Protesters clashed with riot police after a peaceful march marking the 41st anniversary of the 1973 deadly student uprising against the Regime of the Colonels in Greece.

MOSCOW, November 18 (Sputnik) — Approximately a dozen people have reportedly been injured as protesters clashed with riot police after a peaceful march marking the 41st anniversary of the 1973 deadly student uprising against the military junta, as evidenced by numerous accounts on social media.

Over 30,000 people took part in marches across Greece, according to AFP, citing local officials. The march in Athens attracted as many as 18,000 people burning flags of the United States and the European Union near the US embassy.

A 7,000-strong police force was deployed to disperse crowds in Athens should they turn violent, as seen in previous years, the Associated Press reported. Riot police used tear gas and stun grenades as protesters hurled stones and plastic bottles at them. Over 70 people were detained, with the majority later released.

The march, organized by the left and labor unions, is held annually on November 17. On that day in 1973, the Regime of the Colonels, backed by the US, brutally suppressed a revolt by students from the Polytechnic University in Athens, leaving dozens killed.

When a celebration of the fall of the dictatorship takes a wrong turn #Athens #greece #17Nov2014 #17ngr #Grčija pic.twitter.com/kPGi4kfohD

German erasmus student beaten up by the Greek police for standing in the wrong corner doing nothing. #17ngr pic.twitter.com/AlpTo9QiBw

In recent years Greeks have used the occasion to voice their dissatisfaction with government policies, protesting against austerity measures imposed on Greece as part of an international bailout.