Missouri Declares State of Emergency Ahead of Brown Verdict: Governor 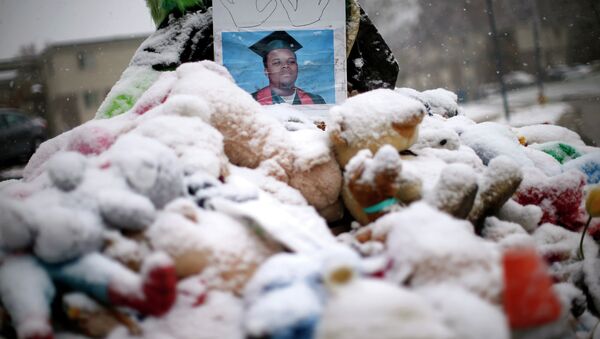 The Missouri Governor has declared a state of emergency in the area, activating the Missouri National guard as the possibility of unrest before a grand jury's verdict later in November on the white officer, who shot and killed unarmed African-American teenager.

WASHINGTON, November 18 (Sputnik) — Missouri Governor Jay Nixon declared a state of emergency and signed an executive order, activating the Missouri National guard as the possibility of unrest before a grand jury's decides whether to file criminal charges on a white police officer who shot and killed unarmed African-American teenager.

"As part of our ongoing efforts to plan and be prepared for any contingency, it is necessary to have these resources in place in advance of any announcement of the grand jury's decision," Governor Nixon said in a statement released Monday.

The St. Louis, Missouri County prosecutor said that the grand jury would make their decision later in November, but the US Department of Justice, which is conducting both the civil and criminal investigations have yet to announce when they would conclude.

"These additional resources will support law enforcement's efforts to maintain peace and protect those exercising their right to free speech," Governor Nixon said.

Michael Brown, an unarmed 18-year-old African-American was shot dead on August 9, in Ferguson, Missouri by white police officer Darren Wilson from his vehicle. The investigation is now looking at whether Wilson fired at the teenager in self defense.

The incident triggered massive protests against police brutality in Ferguson and around the country. The protesters have used the slogan, "Hands up, Don't Shoot" to demonstrate solidarity with Brown, who some witnesses say, was killed in a surrender posture. However, officer Wilson told the authorities he acted fearing for his life, while the teenager struggled for his gun.