US, Russia Should Cooperate to Reach Resolution in Syria: State Secretary 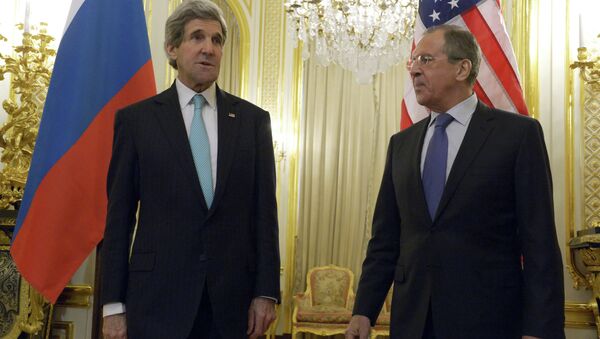 The US Secretary of State said that the US and Russia should continue cooperating on the settlement of the Syrian conflict after the successful destruction of Syria's chemical weapons arsenals.

WASHINGTON, November 17 (Sputnik) – The United States and Russia should continue their cooperation on the settlement of the Syrian conflict, US Secretary of State John Kerry said Monday.

"We believe that there is an opportunity for [such] cooperation… There is no military solution to the conflict in Syria," Kerry said at the third annual Transformational Trends foreign policy forum.

"Russia and the United States worked very closely to do that. And now for the first time in history during the conflict [in Syria] all chemical weapons that were subject to the [Chemical Weapons] convention have been removed and destroyed," Kerry said.

Progress in Syria is possible if the countries continue to demonstrate similar international cooperation and creative diplomacy, Secretary of State concluded.

Syria agreed to place its chemical weapons under international control for further elimination in September 2013, after an unprecedented chemical attack in Eastern Ghouta, a suburb of the Syrian capital, Damascus, killed almost 1,500 civilians, triggering worldwide condemnation and menacing a US-led military intervention.

In late October, UN Organization for the Prohibition of Chemical Weapons (OPCW) announced that a total of 97.8 percent of chemicals, removed from Syria earlier this year, had been destroyed.

The Syrian civil war began in 2011, following anti-government uprisings. The Syrian government has been opposed by diverse extremist groups, such as Islamic State and Jabhat al-Nusra, which is a branch of al-Qaeda. According to the UN estimates, the conflict has claimed more than 200,000 lives, with 9.6 million Syrians having fled their homes.