Extension of Nuclear Talks With Iran Not Under Discussion Yet: US Official 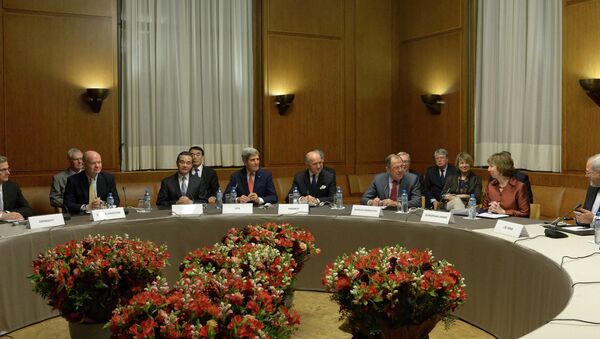 The P5+1 and Iran discussion of its nuclear program have not included the resumption of talks so far.

WASHINGTON, November 17 (Sputnik) – The six nations negotiating with Iran on its controversial nuclear program have not been discussing an extension of the November 24 deadline, a high-ranking US administration official said.

"I can tell you that the extension… has not been a subject of negotiations," the official told reporters on the condition of anonymity Monday.

According to the official, US Secretary of State John Kerry and the negotiating team were in Muscat, Oman last week where a trilateral meeting with the European Union and Iran was held. However, the official said Kerry left Muscat a day earlier, opting not to attend the second day of the meeting.

"The conversations were … tough, direct and serious," the official added, urging Tehran to show "credible and verifiable actions" that Iran has no serious intentions in regard to nuclear weapons.

The P5+1 group that includes Russia, the United States, the United Kingdom, France, China and Germany had a meeting in November 2013 in Geneva where an agreement was reached with Tehran to guarantee by July 2014 the peaceful intentions of Iran's nuclear program. However, the deadline was later extended to November 24, 2014.