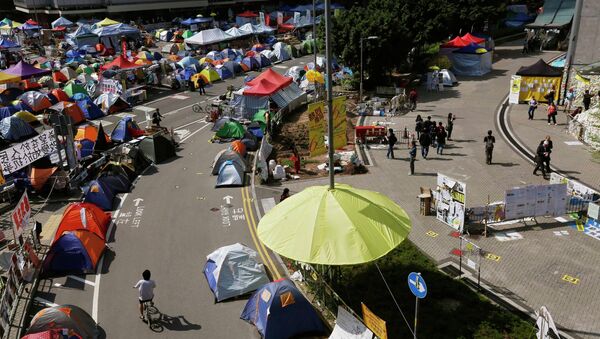 © REUTERS / Bobby Yip
Subscribe
Hong Kong police are preparing to clear the Occupy Central movement camps from the streets of Hong Kong. Police and bailiffs will act in accordance with the High Courts orders. Experts stress that the Mong Kok operation will be most risky, since police may face fierce resistance from protesters.

"Police will take action "this week" to clear protesters from some occupied sites just as a new poll showed that nearly 70 per cent of the public wants the movement to end," South China Morning Post, an Hong Kong English-language media source, reported.

The Occupy Central movement participants have been protesting since September 28, 2014. Protesters demand that the Chinese government should revise its policy towards 2017 leadership elections in Hong Kong, claiming that Beijing's right to vet candidates contradicts "international democratic standards."

However, the South China Morning Post underscores that the latest poll carried out by the Chinese University's Centre for Communication and Public Opinion Survey has indicated that about 70 percent of Hong Kong civilians insist that the protesters should leave the street and halt the movement.

John Tsang Chun-wah, a Financial Secretary, has called upon the Occupy movement leaders to stop the protests: "It is time to return to rationality <…> They should first convince the rest of Hong Kong people with their arguments," he wrote in his weekly blog as quoted by South China Morning Post.

Agence France-Presse stresses that Hong Kong police have warned the protesters against confronting bailiffs who will carry out the court order, threatening the Occupy Central members with the prospect of criminal charges.

"Citic [Tower in Admiralty] will be first, then Mong Kok," an unnamed police source told the newspaper, adding that officers are unlikely to carry out their job "at odd hours."

"The working hours of bailiffs are from 9am to 5pm on weekdays, so that's when it will happen. Perhaps only an hour or two earlier [than 9am] at most, definitely not during the small hours," the source noted.

The Mong Kok operation is considered as a risky one, the source emphasizes, suggesting that bailiffs and police officers may face resistance from protesters there.

It should be noted that Hong Kong's High Court is also considering the requests for injunctions to clear the sites of Harcourt Road, Connaught Road Central and Cotton Tree Drive in Admiralty.