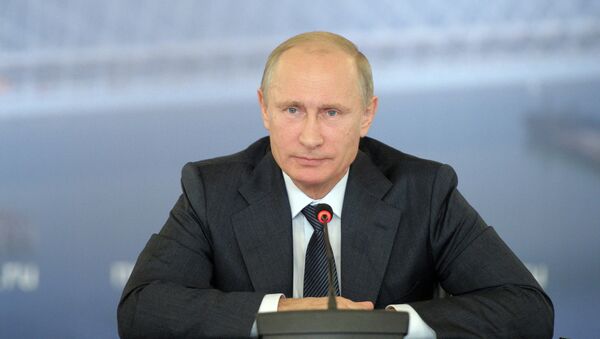 © Sputnik / Alexei Druzhinin
/
Go to the photo bank
Subscribe
According to the instruction of Russia's President Vladimir Putin, the country's Minister of Defense will order the Main Military Medical Directorate and the Main Department of Military Transportation to promptly deliver a mobile clinic to Guinea to help combat the spread of Ebola virus.

According to Peskov, Russia has taken the decision to donate the clinic in response to Guinea's request. Moreover, Putin has ordered to prepare Russian planes, equipped with special capsules for aerial movement of patients for emergency cases.

“In accordance with instructions by the President of Russian Federation, Russian Minister of Defense Sergei Shoigu has set a task to the Main Military Medical Directorate and the Main Department of Military Transportation to promptly transport a mobile clinic [equipped] to fight against the high-risk infectious diseases and a stock of modern medicines to the Republic of Guinea,” the Defense Ministry spokesman Maj. Gen. Igor Konashenkov said in a statement Saturday.

According to the Defense Ministry, the medical cargo will be delivered to Guinea by three An-124 (Ruslan) aircraft.

Ebola has already killed a total of 5,177 people, with 14,413 confirmed, probable, and suspected cases of the virus having been reported, according to the latest World Health Organization data.