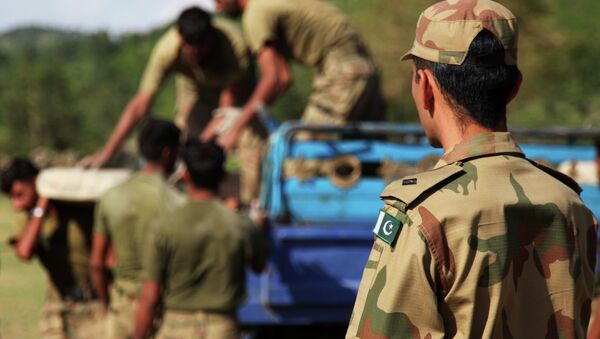 © Flickr / Joshua Kruger
Subscribe
The intelligence wing of India's Border Security Force reports that the Chinese Army conducts training of Pakistani military personnel near the troubled Rajouri sector of the international border between India and Pakistan, the situation on the border is "tense, but generally peaceful."

NEW DELHI, November 15 (Sputnik) — The Chinese Army is training Pakistani military personnel near the troubled Rajouri sector of the international border between India and Pakistan, the intelligence wing of India's Border Security Force (BSF) said in a report.

"Chinese troops are seen in some of the Pak FDL's [Pakistani Forward Defense Locations]… opposite the Rajouri Sector [of the border]. Reportedly, they are imparting weapon handling training to Pak Army troops. However, description of weapons could not be ascertained," a copy of the paper obtained by a Sputnik reporter said.

The report, which was submitted by the BSF to the Indian Home Ministry and National Security Adviser Ajit Doval, characterized the situation in the sector of the international border as "tense, but generally peaceful."

Earlier in November, Indian media reported that a Pakistani suicide bomber took his own life along with about 60 others near the India-Pakistan Border, soon after a daily ceremony when the troops from both sides lower their national flags to commemorate those fallen in bilateral conflicts. Three groups have claimed credit for the attack, all of them have links to al-Qaeda.

Since the creation of modern states of India and Pakistan in 1947, the two countries had been involved in four wars and a number of border skirmishes, mainly due to the territorial dispute over control of the Kashmir region.

Dealing with cross border terrorism and increasing incidents of ceasefire violations at the border with Pakistan are seen as main challenges for the India's new Defense Minister Manohar Parrikar sworn in last week.