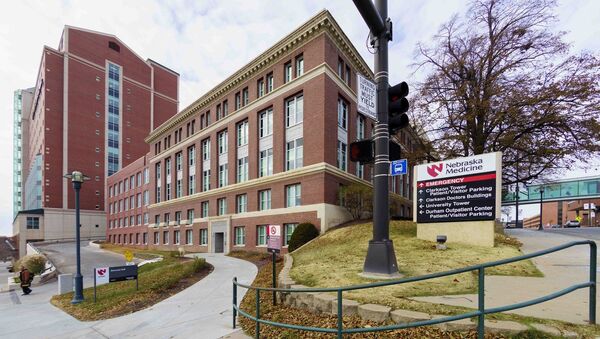 © East News / AP/FOTOLINK
Subscribe
The Nebraska Medical Center said that the US doctor was sicker than any of other patients transferred from West Africa and treated for Ebola in the US.

WASHINGTON, November 15 (Sputnik) — The US resident arriving from Sierra Leone to the United States for Ebola treatment is "critically ill", the Nebraska Medical Center said Saturday.

"The third patient to be treated at Nebraska Medicine — Nebraska Medical Center with the Ebola virus is now scheduled to arrive at Omaha's Eppley Airfield at 4:00 p.m. CST [22:00 GMT]. We have received word he is critically ill — possibly sicker than any of the other patients transferred from West Africa and treated for Ebola in the United States," the Nebraska Medical Center said on its Facebook page.

Earlier on Saturday, the US State Department confirmed that the medical center is ready to receive the patient on Saturday afternoon.

"Just as we have done in previous cases, every precaution is being taken to ensure the evacuation is completed safely and securely, that critical care is provided en route, and that strict isolation is maintained," the Department of State added.

Surgeon Martin Salia, a permanent resident of the United States, contracted Ebola virus while working in a hospital in Freetown, Sierra Leone.

The medical evacuation of Salia to the United States was requested by the doctor's wife who has agreed to reimburse all the expenses of the US government.

According to the latest World Health Organization (WHO) data, 5,177 people have died from the most current Ebola outbreak, with 14,413 confirmed, probable, and suspected cases of the virus having been reported.