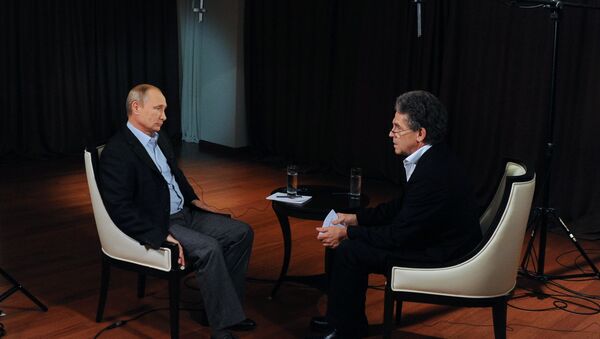 “Russian banks have as at today credited Ukrainian economy with $25 billion. If our European and American partners want to help Ukraine, how can they undermine the financial base limiting our financial institutions’ access to world capital markets? Do they want to bankrupt our banks? In that case they will bankrupt Ukraine. Have they thought about what they are doing at all or not? Or has politics blinded them?” Putin said in his interview with German ARD TV channel.

According to European Commission (EC) estimates, the damage caused to the European economy by the Russian protective measures amounts to from 5 billion to 6 billion euros (about $6-7.5 billion), Russian President Vladimir Putin said Saturday.

"According to the European Commission data, the losses from Russia's counter-measures aimed at protecting our economy are estimated as 5–6 billion euros," Putin said in an interview with the German ARD TV channel.

"Can we estimate the losses that these sanctions have caused Russia? It is rather difficult. To some extent, these are virtual losses. Although we have really sustained losses, it is true," Putin noted.

The sanctions against Russia, Putin noted, have, however, registered some positive development.

"The restrictions imposed on some Russian companies on purchasing certain goods from Western countries, from Europe and the United States, have induced us to produce these goods ourselves. The comfortable life, when all we had to do was produce more oil and gas, and to buy everything else, is a thing of the past. Now we must think about producing goods ourselves, not just oil and gas," Putin stated.

The Russian president also spoke about economic growth and future perspectives. According to him, this year's growth reached from 0.5 till 0.6 percent. As far as the next year is concerned, Putin stated Russia is aiming "to achieve 1.2 percent growth, the year after that 2.3 percent and 3 percent in three years".

"Generally, these are not the figures we would like to have but nevertheless it is growth and we are confident that we will achieve these figures," Putin stated.

In recent months, Russia's economy has been showing signs of a minor slowdown, which is due to geopolitical tensions and the Western sanctions imposed against Russia for its alleged role in the Ukrainian crisis.

As a result of the oil prices falling, the Russian ruble has fallen 23 percent against US dollar in the past three months. In October, the Russian Economic Development Ministry predicted inflation rates for 2014, setting the forecast for this year to 7.2 percent from the original 6 percent.

"This bank [Gazprombank] has the right to demand early repayment because the Ukrainian partners have violated their loan agreement," Putin said in an interview with the German ARD TV channel.

According to Putin, this year Gazprombank has extended a $3.2 billion loan to Ukraine to support the country's energy and chemical industries.

"They are servicing the loan. Naftogaz is servicing one of the loans. However, there are some conditions that are being violated. Therefore, the bank has the formal right to demand early repayment," Putin explained, adding that the Ukrainian side is doing nothing to repay the $1.4 billion loan allocated to the chemical industry.

The Russian president also added that the Russian Ministry of Finance "extended a $3 billion loan a year ago, there was a condition that if Ukraine’s total debt exceeded 60 percent of GDP", stressing that in such circumstances Russia "would be entitled to demand an early repayment".

"Again, if we do it, the whole financial system will collapse," Putin stressed.

As a result of the ongoing political crisis, Ukraine stands on the verge of a default. The authorities in Kiev are trying to rescue the country's economy with international loans.

Russia will not demand that Kiev make an early repayment of Eurobonds in the amount of $3 billion in a bid to help Ukraine to restore its financial system, Russian President Vladimir Putin said Saturday.

"When we extended a $3 billion loan a year ago, there was a condition that if Ukraine's total debt exceeded 60 percent of GDP, we, the Russian Ministry of Finance, would be entitled to demand an early repayment. Again, if we do it, the whole financial system will collapse. We have already decided that we will not do it. We do not want to aggravate the situation. We want Ukraine to get on its feet at last," Putin said in an interview with the German ARD broadcaster.

In late 2013, Russia made a decision to issue Ukraine a loan of $15 billion and bought Ukraine's first Eurobonds in the amount of $3 billion.

This September, Russian Finance Minister Anton Siluanov accused Kiev of procrastinating with repaying the debt. Siluanov said that the loan could not be regarded as invalid since Ukraine had already repaid to Russia $73.3 million as part of the debt, thus confirming that the debt was functioning.

The Russian President Vladimir Putin urged the global community to avoid taking one-sided approach toward the Ukrainian crisis, according to an interview broadcaster by ARD channel Saturday.

"The most important thing is that we do avoid the one-sided perception of the problem," Putin said told the German broadcaster.

"Even rocket attacks were used, but has someone mentioned it? No one," Putin said.

"Does it mean that you want the Ukrainian government to destroy everything there, all political enemies and opponents? Is that what you want? We do not want it and will not allow it [to happen]," he added.

Kiev authorities launched a military operation against independence supporters of southeastern regions of Ukraine in April. The sides have reached a ceasefire agreement in September but have been accusing each other of violating the truce.

On Thursday, Human Rights Watch (HRW) reported that residential areas in Ukraine suffered cluster munition rocket attacks from Kiev’s army during an official ceasefire in early October. The watchdog The HRW report condemned “the indiscriminate, and unlawful, nature of the use of cluster munitions in populated areas.”