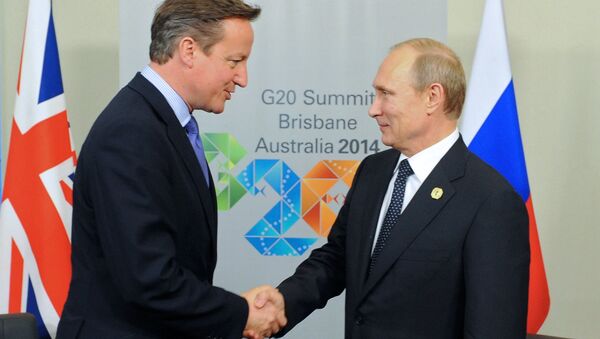 © Sputnik / Mikhail Klementyev
/
Go to the photo bank
Subscribe
Russian President Putin and British Prime Minister Cameron expressed interest in undertaking measures for settling the Ukrainian crisis that would contribute to restoration of relations between Moscow and the West.

BRISBANE, November 15 (Sputnik) — Russian President Vladimir Putin and UK Prime Minister David Cameron expressed their interest during the G20 summit in Brisbane, Australia, in restoring the relations between Russia and the West as well as in finding measures for settling the Ukrainian crisis, Kremlin Spokesman Dmitry Peskov said.

"Even though the rather long talk was mainly on Ukraine, a conversation was held on the fundamental reasons behind the current problems in Russia's relations with the United States and a number of European countries. Besides, Putin and Cameron expressed their interest in restoring these relations and in undertaking measures for settling the Ukrainian crisis, which in turn would contribute to refraining from confrontational moods," Peskov told reporters Saturday.

Tensions in relations between Russia and the West have started to build up since the very outset of the Ukrainian crisis. The Western community criticized Russia for allegedly playing a role in Ukraine’s internal political situation as well as for the reunification of Crimea with Russia. The condemnation by the United States, the European Union and a number of other countries was followed by several rounds of sanctions being imposed against Russia.

All this happened despite assurances by Russia that it is no party to the crisis in Ukraine. Russia also repeatedly reminded that Crimea's reunification with Russia occurred merely by the volition of the territory's residents.