G20 Summit in Facts and Details 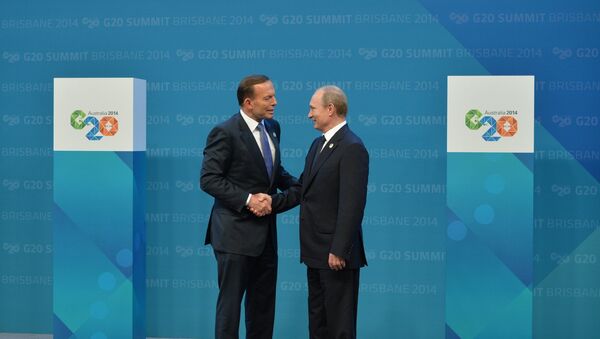 © Sputnik / Alexei Druzhinin
/
Go to the photo bank
Subscribe
The G20 is a leading forum for international cooperation on the most important aspects of the international economic and financial agenda.

MOSCOW, November 15 (Sputnik) — In 2014, the Group of Twenty (G20) summit is held on November 15-16 in the Australian city of Brisbane. It is the first time that Australia hosts a meeting of global leaders at such a scale.

The G20 is a leading forum for international cooperation on the most important aspects of the international economic and financial agenda.

The forum's main tasks include political coordination between the G20 members aimed at achieving global economic stability and sustainable growth, promotion of financial regulation, which would increase risks and prevent future financial crises and the creation of new international financial architecture.

The decision on the formal establishment of the G20 was made during a meeting of finance ministers and the chairmen of the central banks of seven of the world's leading industrialized economies (the UK, Italy, Canada, the United States, Germany, France and Japan) in Washington in September 1999.

The group's establishment followed the 1997-1998 financial crisis, which demonstrated the vulnerability of the international financial system in the context of globalization, and showed that the key emerging economies are not sufficiently involved in the discussion and management of the global economy.

The forum's initial format revolved around annual meetings of finance ministers and heads of central banks. In November 2008, a decision was made to change the format of the G20 meetings to include talks at the level of heads of State and Government.

G20 summits are traditionally attended by the leaders of its permanent member states, as well as five guest states and international organizations. The summits are held in the country which chairs the group.

The so-called troika comprises the three states to consecutively hold the G20 presidency.

The presidency is required to prepare the draft documents that will be adopted and negotiating decisions in the sphere of global finances and economics with the partners. The presiding country raises the issues important for the state, as well as for other G20 partners.

Senior officials representing the leaders of the G20 countries – sherpas – conduct preparations for the summit.

G20 leaders have already met eight times since 2008. They decided to hold no more than one meeting a year from 2010. Russia has taken part in all the G20 summits since its establishment and has offered issues for discussion that have been covered in final declarations. Reforming international financial institutions, adopting standards of financial management and control and limiting the level of the G20 countries' state debt were among the most important topics proposed by the Russian side.

In 2013, Russia held the presidency of the G20. The final summit was held on September 5-6 in St. Petersburg. The leaders' main attention was directed toward issues supporting economic growth and financial stability, generating employment, stimulating investments, boosting multilateral trade, as well as contributing to international development. The war in Syria was also on the agenda, and the majority of the forum's leaders expressed their opposition to military intervention in Syria.

In the final document – the St. Petersburg declaration of the G20 leaders – that was adopted in September 2013 marking the fifth anniversary of the organization, leaders reiterated that G20 is the main international economic cooperation forum.