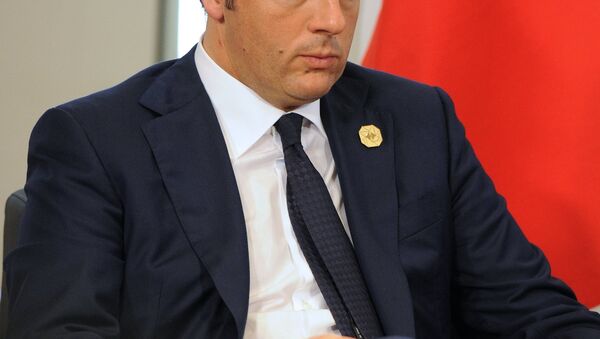 © Sputnik / Michael Klimentyev
/
Go to the photo bank
Subscribe
Italian Prime Minister Matteo Renzi hopes Russia and the European Union will cooperate and settle the situation in Ukraine; Renzi said he would like to meet Russian President Vladimir Putin in Milan in May 2015.

BRISBANE, November 15 (Sputnik) — Italian Prime Minister Matteo Renzi expressed hope that Russia and the European Union will cooperate to help settle the situation in Ukraine, after the first steps toward joint work have been made made during the Asia-Europe meeting (ASEM) in Milan this October.

"I hope that this meeting has helped us to move forward with issues that remain open between Russia and the European Union. In particular, I am talking about Ukraine. I would like our Milan meeting to be the basis of our further dialogue," said Renzi during a meeting in the framework of the G20 summit in Australia. 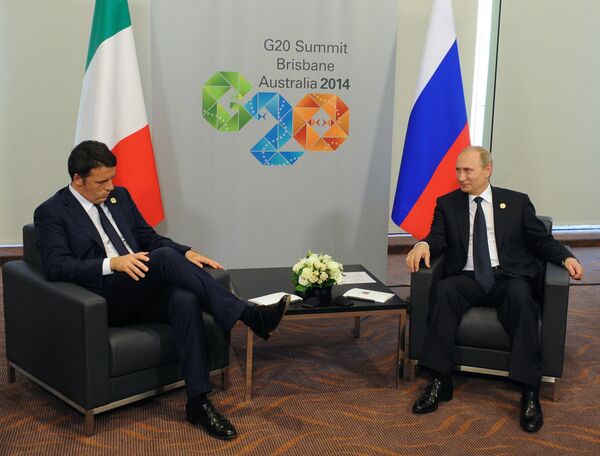 Russian President Vladimir Putin, right, during a meeting with Matteo Renzi, Chairman of the Council of Ministers of the Republic of Italy
© Sputnik / Michael Klimentyev

"Putin and Renzi have exchanged views on the situation in Ukraine. They have expressed concern over escalation of tensions in the South-East of the country [Ukraine]. Besides, they have briefly covered bilateral relations," Kremlin's spokesperson Dmitry Peskov told journalists following the meeting.

On Wednesday, NATO said it had observed columns of Russian tanks, artillery and combat troops entering Ukraine. Russia's Foreign Ministry stated that no Russian troops have crossed the border into Ukraine and that there is "certainly no Russian military presence on the territory of Ukraine."

The Organization for Security and Co-operation in Europe (OSCE) earlier reported that its Special Monitoring Mission had observed a convoy of unmarked military trucks in eastern Ukraine but failed to identify to whom they belonged. Deputy Commander of the Donetsk People's Republic's militia Eduard Basurin told Sputnik that the convoy detected by the monitors belonged to independence supporters.

Renzi also said he was hopeful to meet Russian President Vladimir Putin during the Expo, which will take place in Milan in May 2015.

"Vladimir Putin has said that he will certainly accept the invitation," Peskov stated.

In turn, Russian leader thanked Renzi for the hospitality received in Milan during the ASEM meeting in October.

Putin and Renzi arrived in Brisbane, Australia to attend the ninth G20 summit that started Saturday. The two-day summit is attended by the world leaders and as many as 4,000 delegates, who join forces to tackle issues mounting a global challenge, such as the financial crisis and worldwide problems related to employment and labor mobility.