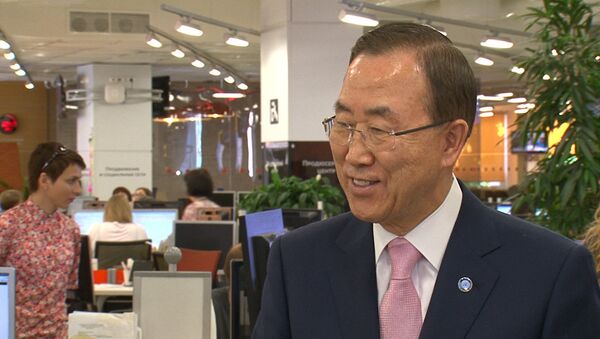 © Sputnik
Subscribe
UN Secretary General hails adoption of a charter that will pave the way for a civilian-led power transition in Burkina Faso.

UNITED NATIONS, November 15 (Sputnik) — UN Secretary General Ban Ki-moon has congratulated the people of Burkina Faso on the adoption of a charter that will pave the way for a civilian-led power transition in the country.

"The Secretary General congratulates the people of Burkina Faso on the consensual adoption of a Charter of the Transition, which will provide the legal framework for a civilian-led transition culminating in elections in November 2015," a statement, released by the United Nations Friday, said.

According to the statement, Ban Ki-moon "looks forward to the signing of the Charter, the designation and installation of a civilian transitional President, and the commencement of the work of the transitional organs" and "reiterates his encouragement to all parties to continue to use dialogue throughout the transition period".

Burkina Faso's army reached an agreement with opposition parties, civil groups and religious leaders for a transition to civilian rule in the country on Thursday.

The protests that saw 30 dead and 100 injured began on October 30, when lawmakers prepared to amend the constitution to allow 63-year-old Compaore to contest the November 2015 elections. The protesters set the parliament building in the capital Ouagadougou on fire.

On October 31, Compaore resigned and called for the presidential elections to be held within 90 days.