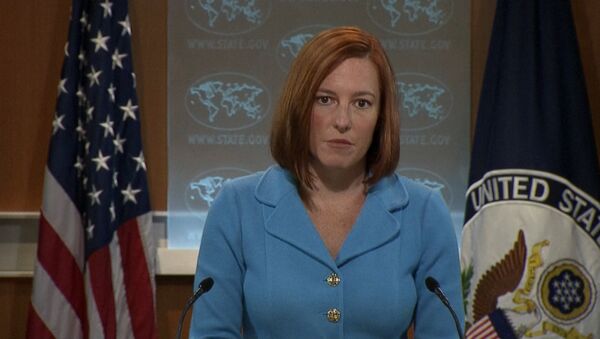 © Sputnik
Subscribe
US State Department spokesperson Jen Psaki says that US does not support Russia's view that the investigation into Malaysian Boeing MH17 crash in Ukraine is delayed.

WASHINGTON, November 14 (Sputnik) – The United States does not support Russia's view that the investigation into Malaysian Boeing MH17 crash in Ukraine is delayed, US State Department spokesperson Jen Psaki said at a press briefing on Friday.

"I do not believe that we share that view," Psaki said when asked if the United States agree with Russia's opinion that MH17 investigation is delayed and is not proceeding according to the Security Council resolution and International Civil Aviation Organization guidelines.

Russian Foreign Minister Sergei Lavrov told US Secretary of State John Kerry in a phone conversation earlier on Friday that Moscow is concerned by delays in the investigation into the crash of the Malaysian Airlines flight MH17 in eastern Ukraine.

The Malaysia Airlines Boeing 777 flying from Amsterdam to Kuala Lumpur crashed near Donetsk on July 17. All 298 people on board, including 283 passengers and 15 crew members, died in the crash.

Kiev accused independence supporters in eastern Ukraine of shooting the plane down, but has not provided any evidence to back this claim. The local militia leaders have said that they do not have weapons capable of shooting down a plane flying at 32,000 feet.

On Thursday, Australian Justice Minister Michael Keenan said that the investigation will be extended until August 2015. The joint inquiry team into the crash includes the Netherlands, Ukraine, Australia, Belgium and Malaysia, as well as other international partners.