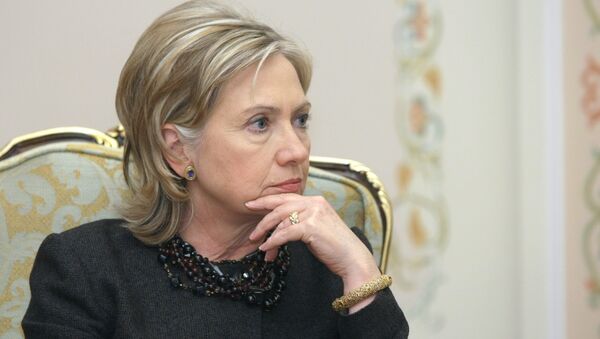 © Sputnik / Aleksey Nikolskyi
/
Go to the photo bank
Subscribe
In emails leaked to ABC News candidates for the post of Clinton’s campaign chief compare themselves to organized crime bosses.

MOSCOW, November 14 (Sputnik) — Email exchanges between two men who are contending to run Hillary Clinton’s campaign for the presidency have been leaked to ABC News, in which they refer to themselves as “Mafia,” who will “smite Republicans.”

“F U Republicans. Mafia till I die,” wrote Democrat operative Marlon Marshall in one email. “If you have just a few minutes, hop on that activate and punish those voters!”

Marlon Marshall currently works as Special Assistant to President Obama, and Principal Deputy Director of Public Engagement at the White House. ABC News clarifies that ‘activate’ is a software program by means of which volunteers can target and telephone voters anywhere in the country.

The leaked emails come from a listserv of Democrat friends and associates of Marshall and friend Robby Mook, who have both been tipped as contenders to run a Clinton campaign in 2016. Prior to working in the White House, Marshall was Deputy National Field Director for Obama’s re-election campaign.

Both are prominent behind the scenes figures in Democrat political circles, seasoned campaign managers who ran some operations during Clinton’s 2008 run for the Democratic nomination. Mook has ten years experience of Democrat campaign management, including Howard Dean’s 2004 presidential campaign and Terry McAuliffe’s successful gubernatorial campaign in Virginia.

ABC News describes the duo “demonstrating an aggressive tone” in the exchanges, which are “often self-mocking and sometimes border on being profane.” Mook and Marshall describe themselves as the “Deacon” and “Reverend” respectively in the course of their correspondence.

A source told ABC News that more than 150 campaign veterans are privy to the listserv, maintained by Mook and named the “Mook Mafia.” The emails were leaked to the paper by an anonymous Democrat on the list who is supportive of Hillary Clinton, but does not like the idea of Mook or Marshall heading her campaign.

The operatives are two names on a shortlist of candidates who might run a prospective Clinton campaign for the Presidency. In September, US online magazine Politico.com reported that current Counselor to President Obama John Podesta is one likely candidate to head the campaign. Podesta served as White House Chief of Staff under Bill Clinton from 1998 to 2001.