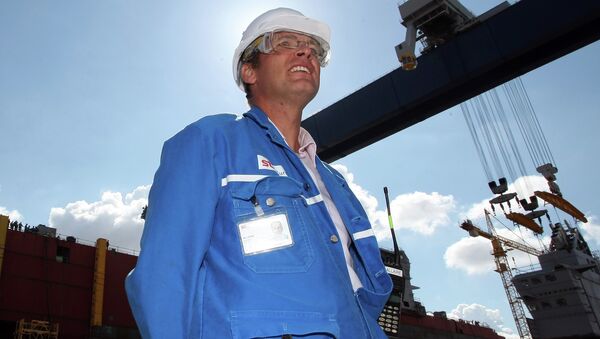 PARIS, November 14 (Sputnik) — Shipyard workers in the French city of Saint-Nazaire, where the construction of Mistral-class helicopter carriers for Russia is underway, have no information on Paris' decision on the dates of the ships delivery to Russia, Saint-Nazaire Municipal Councilor Gauthier Bouchet told Sputnik.

People who are working on the ships' construction have not received answers to their questions, such as "what is the new date for the ships" delivery? Will the workers be protected if the delivery is cancelled, or will they lose their jobs?" Bouchet said Friday.

Bouchet stated, however, that Saint-Nazaire residents are patiently waiting for a final decision and are not planning any protests over the matter.

"Neither the shipyard workers, nor the city residents plan to hold protests or public demonstrations to demand the delivery of the ships. The only ones who can do it [start protests] are those who oppose the ships delivery to Russia. They have poor attitude toward those who have a different position," Bouchet explained.

Earlier on Friday, a high-ranking source in Moscow told Sputnik that Russia would give Paris until the end of November to deliver the first Mistral-class helicopter carrier and would make serious legal claims if Paris does not fulfill its contract.

The deal has been in jeopardy after the West started implementing economic sanctions against Russia over the Ukrainian crisis. French President Francois Hollande threatened to suspend the deliveries of the ships in October, citing Russia's alleged involvement in the Ukrainian conflict – a claim that Moscow has repeatedly denied.

In turn, Moscow has stated that if the contact is cancelled, Paris will have to pay a large penalty. Russia also said that if anything goes wrong, Russia is able to build its own version of the ships.