Netherlands to Collect MH17 Debris Only When Malaysia Steps In: DPR 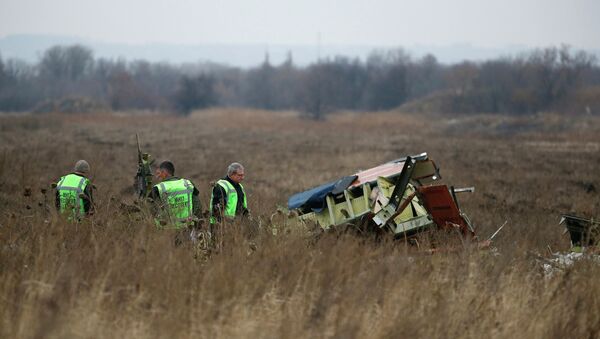 © REUTERS / Maxim Zmeyev
Subscribe
The transport minister of the self-proclaimed Donetsk People's Republic (DPR) stated that Netherlands are unlikely to sign the protocol on the collection of the wreckage of the Malaysian MH17 unless Malaysia presses them.

DONETSK, November 14 (Sputnik) — The Netherlands are unlikely to sign the protocol on the collection of the wreckage of the Malaysian MH17 flight in eastern Ukraine unless Malaysia presses them, the transport minister of the self-proclaimed Donetsk People's Republic (DPR) told Sputnik Friday.

"I think they will sign it when the Malaysian side joins the process and puts pressure on the Netherlands. Because the Dutch side has certain obligations to collect the remains and debris," Semyon Kuzmenko said.

"I think [the wreckage] must be collected before it snows, because after that everything will go," he added.

On Tuesday, the Dutch side removed the DPR from the initial version of the November 10 protocol on collecting the MH17 flight wreckage, since the self-proclaimed republic is not recognized by the European Union.

On July 17, a Malaysia Airlines plane flying from Amsterdam to Kuala Lumpur crashed in southeastern Ukraine’s Donetsk region, killing all 298 people on board. Kiev accused the region's pro-independence forces of shooting the plane down, but has not provided any evidence to support the claim.

A preliminary report issued by the Dutch Safety Board in September suggested that ta large number of "high-energy objects" colliding with the plane from the outside probably caused the crash.

On November 6, a group of Dutch experts began collecting wreckage from the site of the crash. The experts collected small fragments of the plane and placed them in special containers ready for further examination.