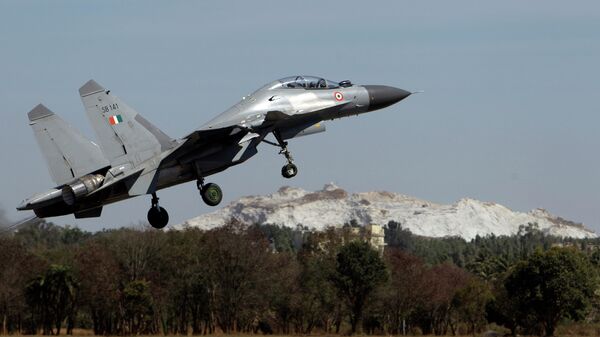 © AP Photo / Aijaz Rahi
Subscribe
The Indian Air Force report that the country's fleet of Sukhoi Su-30 Flanker-H jets may return to the skies after a month-long suspension that followed a crash in October.

"The court of inquiry has not been finalized so far. It is in the final stages. I hope the Su-30s will start very soon, in about a week's time," Raha said on the sidelines of the event providing career support to retiring pilots.

The fleet of almost 200 Russian-designed twin-engine jets, which according to Indian media, constitutes "virtually the backbone" of the IAF, was temporarily suspended from flying after two pilots ejected from the aircraft as they approached a military aerodrome in southeastern India for landing on October 14. Both landed safely without injuries.

The month-long suspension is the longest grounding of Sukhoi fighters since 2009, according to media reports. The Indian Air Force and Hindustan Aeronautics were joined by Russian experts to evaluate the fleet's condition before declaring it operational.