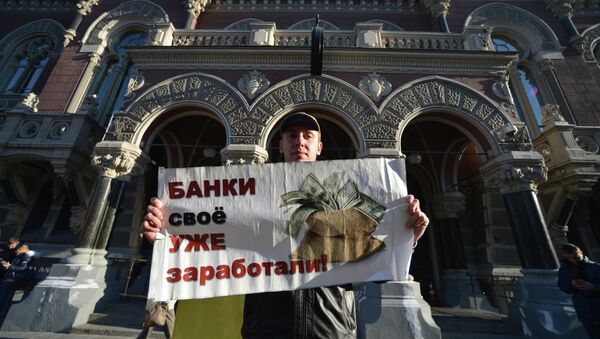 © Sputnik / Evgeny Kotenko
/
Go to the mediabank
Subscribe
International
India
Africa
Ukrainians took part in demonstration outside the National Bank headquartes in Kiev, demanding their deposits back from VAB Bank.

MOSCOW, November 14 (Sputnik) – Ukrainians gathered outside the National Bank headquarters in Kiev on Friday, demanding their deposits back from VAB Bank.

Demonstrators are holding banners and placards calling for the VAB’s main shareholder, Oleh Bakhmatiuk, “to return the money,” according to photos posted by freelance journalist Volodymyr Solohub on Twitter.

Since early October, VAB Bank has been delaying the return of deposits to its clients, with Ukrainian media speculating on its possible bankruptcy.

Founded in 1992, VAB is classified as a “large” bank by the National Bank and in July, ranked 15th among Ukrainian banks in terms of assets held.

Torn by an internal conflict in its southeastern regions, Ukraine is experiencing a severe economic crisis. The country's National Bank has estimated that inflation in 2014 will reach 17 percent and the GDP will fall by 7 percent.