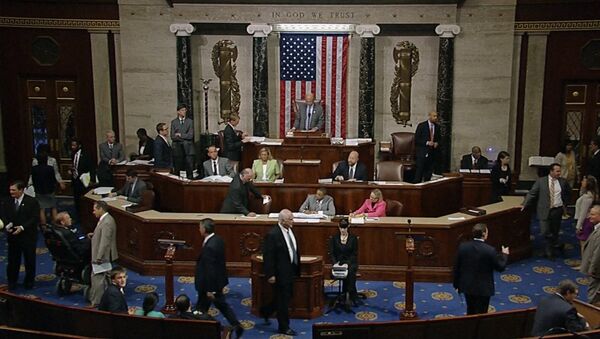 WASHINGTON, November 14 (Sputnik) — Providing US government funds for the war against Islamic State (IS) without a congressional authorization is unconstitutional, California Congressman John Garamendi has told RIA Novosti.

"Funding without legal [Congress] authority I believe is not constitutional, is not wise, and certainly I will not support it," Garamendi said of US military operations conducted in Iraq and Syria.

The last time Congress voted on the hostilities in Iraq and Syria was in September when the House and Senate approved $500 million to train and equip moderate Syrian opposition to fight IS, Garamendi stated.

"[That vote] was not an authorization to use force, and it certainly did not authorize airstrikes in Syria," he continued.

The US Congress is now considering a White House request to supply $5.6 billion for the war against the extremist group. US President Barack Obama said last week he would begin talks with Congress on a new authorization to use military force (AUMF) against IS.

"The administration is presently getting what they need to conduct the program they have put in place; that is money and an open road ahead of them," Garamendi said.

The congressman also criticized members of the US House of Representatives for not independently drafting an AUMF.

The airstrikes against Islamic State in Iraq and Syria have so far been conducted on the basis of authorizations passed in 2001 and 2002, but various politicians have said Washington was going over the limits of those provisions.

US expenditures in the war against IS have so far cost approximately $8 million every day, as reported by US Chairman of the Joint Chiefs of Staff Martin Dempsey on Thursday.