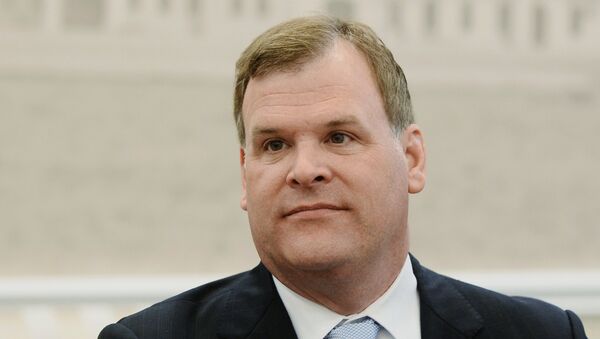 MOSCOW, November 13 (Sputnik) — Canada is worried by the escalation of violence in Ukraine and calls for the removal of the Russian troops having allegedly crossed the country's border, Canada's Foreign Minister stated Thursday.

"Canada is deeply concerned by the escalation in violence in eastern Ukraine and by the reported movement of additional Russian troops and weapons into Ukraine in recent days," John Baird, Canada's foreign minister, said in a statement released on the Ministry's website.

"Russia must immediately withdraw its troops and weapons from sovereign Ukrainian territory and cease its material support to insurgents. Russia and the insurgents must also adhere to the ceasefire and remove heavy weaponry from the agreed-upon areas," Baird added.

According to the minister, Canada is monitoring developments and will keep on working with partners and allies in order to make Russia "cease its aggression."

On Saturday Special Monitoring Mission in Ukraine (SMM) of the Organization for Security and Co-operation in Europe (OSCE) detected a convoy of 43 unmarked military trucks moving toward eastern Ukraine. However, as the SMM was on the move, it could not inspect the convoy and its contents. Early Monday SMM reported about two new convoys near Donetsk.

Deputy commander of the Donetsk People's Republic militia Eduard Basurin told RIA Novosti on Sunday that the convoy detected by SMM belonged to the independence supporters and was moved from its initial locations “for tactical reasons”.

The conflict in Ukraine escalated in mid-April, when Kiev launched a military operation against eastern Ukraine’s independence supporters, who refused to recognize the new government, which came to power as a result of the February coup.

The conflicting sides reached a ceasefire agreement at a September 5 meeting of the trilateral Contact Group on Ukraine in Minsk. However, both sides have subsequently accused each other of violating the truce.

The United States and its allies have repeatedly accused Russia of meddling in Ukraine's internal affairs, sending troops to Ukraine, and have gone as far as to claim that Moscow planned to invade Ukraine. However, none of their statements have been substantiated.