US to Discuss Alleged Russian Incursion in Ukraine on G20 Margins: Official 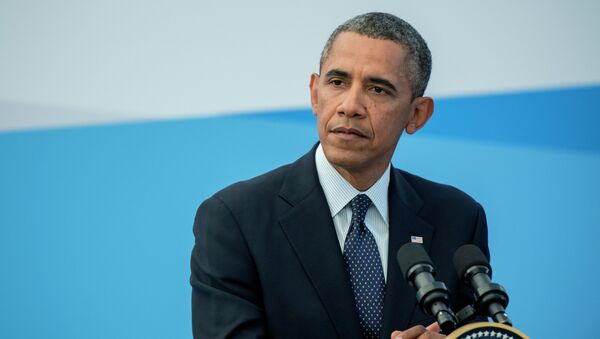 © Sputnik / Sergey Guneev
Subscribe
US Deputy National Security Advisor Ben Rhodes stated during a press briefing that US to discuss the issue of Russian troops allegedly crossing the Ukrainian border with its European allies on the sidelines of the upcoming G20 summit.

WASHINGTON, November 13 (Sputnik) – The United States will discuss the issue of Russian troops allegedly crossing the Ukrainian border with its European allies on the sidelines of the upcoming G20 summit, US Deputy National Security Advisor Ben Rhodes stated during a press briefing on Thursday.

"At the G20 … President [Barack Obama] will have a chance to see his European counterparts – [German] Chancellor [Angela] Merkel and others – and be able to have discussions on the margins there about the situation in Ukraine," Rhodes said.

On November 15-16, Australia's Brisbane will host a G20 summit, featuring the leaders of the organization’s member nations, including Russian President Vladimir Putin

The official added that President Obama had already raised the issue of alleged Russian invasion to eastern Ukraine with the "relevant leaders" at the Asia-Pacific Economic Cooperation summit in Beijing.

"When he [Obama] saw President Putin, he made clear the importance of abiding by and respecting the Minsk agreement," Rhodes noted. "And we've been very clear in expressing our concern about the recent reports of Russian military support flowing across the border to the separatists."

The Organization for Security and Co-operation in Europe (OSCE) said it had detected a convoy of 43 unmarked military trucks moving toward eastern Ukraine on Tuesday. A day later, NATO claimed it had observed columns of Russian tanks, artillery and combat troops entering Ukraine over the past two days.

On Wednesday, Russian Foreign Ministry said Russian troops have never crossed the Ukrainian border, adding that the OSCE report was being examined.

Since the beginning of the military conflict in eastern Ukraine in April, Kiev and the West have repeatedly accused Russia of intervening in the Ukrainian crisis, as well as of sending troops and weapons to independence supporters in the Donetsk and Luhansk regions. Moscow has labeled the accusations as groundless.