UK Navy Hints at Placing Order Outside Britain to Get Better Price: Veteran 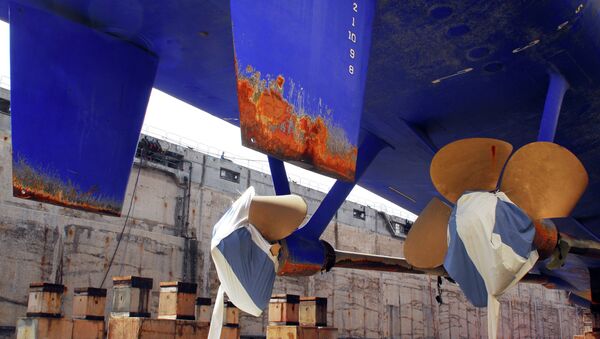 GLASGOW, November 13 (Sputnik), Mark Hirst – Speculations by the UK Navy chief on the possible placement of a $6.3 billion order to build advanced frigates outside of Britain were made in order to bargain a better price, a former Royal Navy officer Feargal Dalton told Sputnik on Thursday.

The yards of BAE Systems, the company expected to win the Ministry of Defense (MoD) contract, are located in Glasgow. The pledge to build the ships in Scotland was one of the anti-independence forces' central arguments in the run-up to the September referendum.

"The MoD are in a negotiating process with BAE for a price and clearly some of that is at play here," Dalton, currently Glasgow City Councillor, said.

In late October, the head of the Royal Navy, First Sea Lord Adm. George Zambellas said in an interview with US Defense News that the order for cutting-edge Type 26 frigates would not necessarily be placed in the UK.

There has been speculation the MoD would prefer to place future naval orders with the French Government, but, according to Dalton, it is likely to have been fueled by the defense ministry itself in order to secure the best price.

"I think what the MoD are doing is trying to benchmark what the French option to build these vessels might be," Dalton stated.

The ex-Navy submarine commander accused the UK Government of wrongly implying that without MoD orders shipbuilding in Glasgow would dry up, as BAE Systems is a multinational company, and "the outcome of the referendum would have had no bearing on them."

The Scottish independence referendum took place on September 18, with some 55 percent of the population choosing to stay within the United Kingdom.

The pledge to build 13 Type 26 frigates in Glasgow, safeguarding thousands of jobs, was one of the top arguments of unionist politicians, including Defence Secretary Michael Fallon. On Wednesday, British media reported that Fallon ruled out the possibility of constructing new frigates elsewhere outside the United Kingdom.