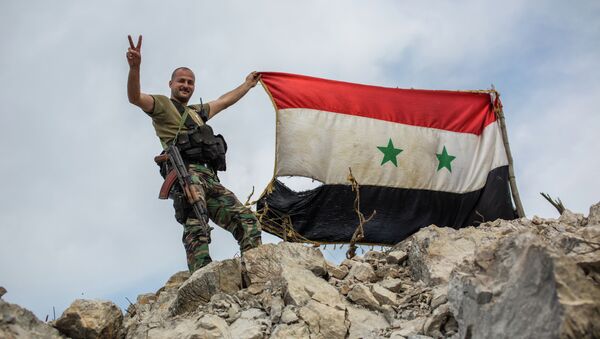 © Sputnik / Andrey Stenin
/
Go to the photo bank
Subscribe
Syria army and local militia are engaged in fierce battles in the country’s northeast against IS "to their last bullet" to avoid surrender, reports The Independent.

MOSCOW, November 13 (Sputnik) — The Syrian army and local National Defense Force militia are fighting fierce battles in the country’s northeast against Islamic State militants, often resisting to the last bullet in order to avoid capture, a journalist for the UK’s The Independent embedded with Syrian forces has said.

Journalist Robert Fisk, stationed outside the northeast city of Qamishli, quoted an unnamed Syrian army general, who told him that in a recent battle in a village to the south of the city, several members of Syria’s 54th Special Forces Paratroop regiment, surrounded by IS militants in a house, “chose to fight to the end, to their last bullet,” all of them killed in the firefight.

Fisk explained that the soldiers’ determination to resist was based at least in part on IS’s brutal treatment of its enemies, which are often filmed being beheaded, executed by firing squad, and mutilated.

Despite being outnumbered and sometimes outgunned, the Syrian military has made advances to the south of the city over recent months, taking over 20 square kilometers of territory and digging in to prevent IS from firing rockets into the city.

The Syrian army has made a determined effort to keep the IS off its own territory, and to break the militants’ campaign for hearts and minds as well. Discussing the known IS tactic of unfurling its menacing flag in the territories it captures, the general interviewed by Fisk noted that “whenever they put a flag up, even for five minutes, I call in artillery fire and blow it to bits. They haven’t tried to raise a flag here for weeks.”

Despite commentary by Western governments and some media that Syria is avoiding combat with IS to focus on local, anti-Assad insurgents, Fisk confirmed that the Syrian army’s operation around Qamishli “proves that the Pentagon’s claim that the Syrian government doesn’t choose – or want – to fight Isis, is untrue."

Fisk’s interview with the local general also confirmed IS’ internationalized nature, the general saying that in listening in on IS radio communications, “we often don’t understand them because they are foreigners speaking their own language.” The general’s comments support the idea that Syria has been bravely carrying the responsibility in the difficult fight against the global jihadi movement over the course of several years.

Syrian Army Confident in Ability to Defeat IS Long-Term

The Syrian military offensive around Qamishli has routed the IS forces there, breaking the militants’ confidence following the capture of wide swathes of territory across Iraq and Syria in the summer, including the northern Iraqi city of Mosul. The general told Fisk that his forces now “know their tactics and they are not going to get past us.”

A Syrian special forces soldier told CCTV that “the open lands” around Qamishli “give us an opportunity to detect all infiltration attempts beforehand,” adding that the military has been beefed up recently by Russian 9K115-2 Metis anti-armor missiles, which are being used “to target ISIL pickup trucks” with heavy machineguns, the militants’ “most common weapon.” The unnamed soldier said that the army has already “stopped” over 1,000 enemy militants since last year.

Fisk’s general told him that the Syrian army’s tactics have also evolved, using trenches, artillery, and trucks fitted with heavy machineguns, together with the light-weight anti-armor missiles. The army has been drafting volunteer self-defense militias to patrol areas liberated from IS.

The recent campaign in the villages surrounding Qamishli has brought back local civilians and farmers, who have begun replanting crops destroyed earlier by retreating IS militants.

Commenting on the impact of Western airstrikes in the local struggle against IS, the soldier interviewed by CCTV noted that they “are futile and they are designed to prevent us from making gains against ISIL.”

The reports of the Syrian army’s successes in the northeast follow reports from last week about government forces retaking control over gas fields around Homs in the center of the country. These important fields, temporarily captured by IS earlier this month, provide Homs and Damascus with gas for power generating capacity. Previously, IS had also captured nearly all the oil fields in the Deir al-Zour region near the Iraqi border to the country’s east.