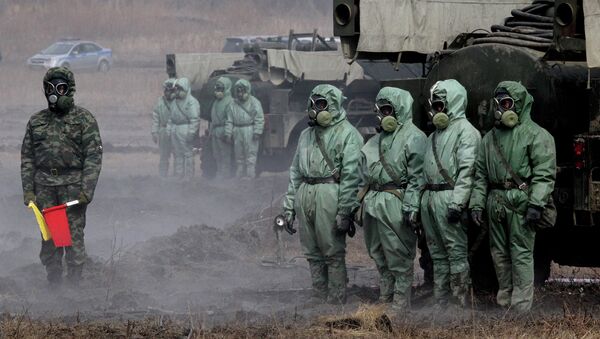 MOSCOW, November 13 (RIA Novosti) — Radiological, Chemical and Biological Defense Day is marked annually on November 13 in accordance with the presidential decree No. 549, "On the establishment of professional holidays and commemorative days in the Armed Forces of the Russian Federation," of May 31, 2006.

The history of this branch of the armed forces dates back to World War I, when chemical weapons were first used for military purposes. Therefore, these troops were initially known as chemical forces. They consisted of divisions and units that used gas cylinders and gas pots with poisonous agents and gas masks for protecting troops.

The first Red Army chemical defense units were formed in accordance with Order No. 220 of the Revolutionary Military Council on November 13, 1918, considered the radiological, chemical and biological defense (RCBD) troops" official date of formation.

By early 1925, chemical units were introduced in all infantry and cavalry regiments, and in 1927 in divisions and brigades.

From 1939 to 1940, separate chemical defense (CD) battalions and separate central and district decontamination battalions were formed; decontamination companies were introduced into armies, corps and infantry divisions; CD platoons and flamethrower crews were formed in regiments. Separate flamethrower-chemical battalions and companies were introduced in tank divisions and brigades. CD and smoke-screening divisions were formed in the Navy and deployed at naval bases.

Chemical troops expanded greatly during World War II. They conducted reconnaissance missions to prepare against chemical attacks and issued warnings to troops if they were at risk of such an attack, worked to ensure the readiness of military units, formations and forces to perform combat missions in the face of the possible use of chemical weapons by the enemy, destroyed enemy personnel and equipment with flamethrowers and incendiary weapons, and built smokescreens for troops and military facilities.

Thousands of soldiers from chemical units were awarded orders and medals, and 28 were awarded the title of Hero of the Soviet Union for their military prowess demonstrated during World War II.

Chemical troops have seen a number of major shifts in their work since WWII. After a number of foreign armies introduced nuclear weapons and new highly toxic chemical and biological agents, the scope of chemical forces operations was expanded, their personnel increased and their organizational structure and technical equipment improved.

RCBD troops are special soldiers used in operations aimed at reducing losses of ground forces and the ensuring completion of their combat missions in the case of radiological, chemical or biological (RCB) contamination, as well as increasing their survivability and protection against precision weapons and other weapons.

RBCD missions include identifying and assessing RCB conditions, and the extent and effects of damage caused to RCB facilities, ensuring the protection of units and formations against the damaging factors of weapons of mass destruction and radiation, chemical and biological contamination, reducing the visibility of troops and facilities, dealing with the aftermath of accidents at RCB facilities, and inflicting enemy losses through the use of flamethrowers and incendiary weapons.

RBCD troops are dual purpose troops that can be used in wartime and peacetime for providing relief during emergencies and disasters at hazardous radiological, chemical and biological industrial enterprises.

One such example of this is the relief they provided in the aftermath of the Chernobyl accident in 1986. Several hundred soldiers and officers were awarded orders and medals for their courage. In 2013, RBCD units provided relief for floods in eastern Russia.

RBCD operations are being expanded further by creating a modern system of identifying and evaluating the extent and effect of the use of weapons of mass destruction that is integrated with automated troops and weapons command and control, capable of functioning consistently in the event of the use of weapons of mass destruction and heavy electronic countermeasures. In addition, RBCD units and formations will be outfitted with new and highly effective reconnaissance equipment, individual and collective protection gear, technical means of reducing visibility and camouflaging, flamethrowers and incendiary weapons. Improved substances and compounds for decontamination and new methods for such operations will be introduced as well.