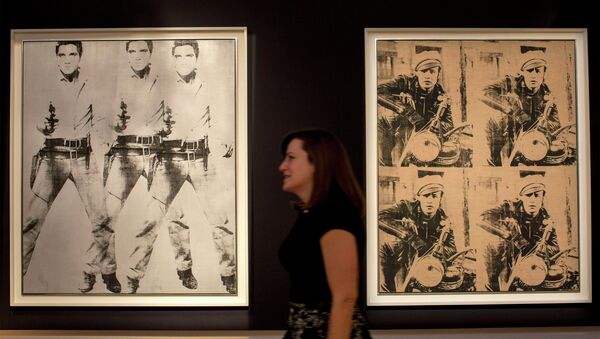 Christie's sold two paintings of Elvis Presley and Marlon Brando by US artist Andy Warhol for $151.5 million in New York.

MOSCOW, November 13 (RIA Novosti) – Two paintings by US artist Andy Warhol, "Triple Elvis" and "Four Marlons," have been sold for $151.5 million by Christie's in its evening sale Wednesday in New York, according to the auction house's website.

"Triple Elvis," first shown at a 1963 exhibition in Los Angeles, was sold for $81.9 million. "Four Marlons," depicting American actor Marlon Brando four times repeated, brought in $69.6 million, according to Christie's. The paintings were expected to sell for about $60 million each.

Both paintings are considered Warhol's most famous portraits and continue his series of repeating images of celebrities.

The artist started this series, made by screenprinting, in 1962 with 22 images of pop star Elvis Presley. In 2012, his "Double Elvis" painting fetched $37 million at Sotheby's.

The silkscreen image of Marlon Brando, painted in 1966, is one of the two Warhol's works depicting Brando four times. The other similar canvas is exhibited at the Louisiana Museum of Modern Arts in Copenhagen.

Before the "Triple Elvis" and "Four Marlons" went under the hammer in New York, they had been owned by the German casino company WestSpiel since the 1970s. As the casino's director Lothar Dunkel explained in a statement, the decision to sell the works was due to favorable market conditions, reflected in the current high demand for Warhol works.

Warhol, best known for his pop-art portraits, became famous in the 1960s for his images of Campbell's soup cans.