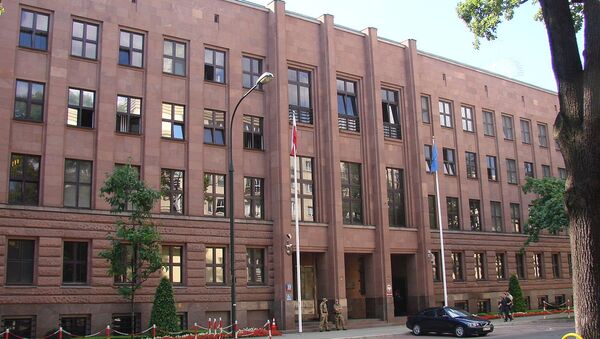 © Photo : Wikipedia / Gnesener1900
Subscribe
Poland's Department of Foreigners stated that it would hear the case of a Rossiya Segodnya stringer, who faces expulsion from the country.

MOSCOW, November 12 (RIA Novosti) — The Department of Foreigners in Poland's Mazowieckie Province said on Wednesday that it would hear the case of a Rossiya Segodnya stringer, facing expulsion from the country, on November 26.

"The case will be considered November 26, in Warsaw, at 5 Dluga Street," the department's press office said.

On October 24, Polish authorities announced they were going to cancel the residence permit of Leonid Sviridov, Rossiya Segodnya's freelance correspondent in Warsaw, though it failed to explain the reasons behind the move. If the foreigners' office upholds this decision, the journalist will have 30 days to leave the country.

Earlier, Deputy Foreign Minister Rafal Trzaskowski hinted that Poland had every reason to expel the stringer. Sviridov also had his press accreditation canceled starting October 24. The Russian Foreign Ministry condemned these decisions, saying it reserved the right to respond in kind.

Rossiya Segodnya's Director General Dmitry Kiselev branded Poland's decision to take Sviridov's accreditation away as "hindrance of the journalist's work", which he said violated freedom of the press.

The stringer first received his press accreditation at the Polish Foreign Ministry in 1998 and has been working in Poland since 2003.

The crackdown on the Russian reporter comes amid an espionage scandal following the arrest of a high-ranking Polish Army officer and lawyer, who were accused of spying for Russia.

In the wake of the espionage row, the Rzeczpospolita newspaper claimed that Poland could deport both Russian diplomats and journalists.