At Least 12 Injured in Rome Following Protests Against Illegal Migrants 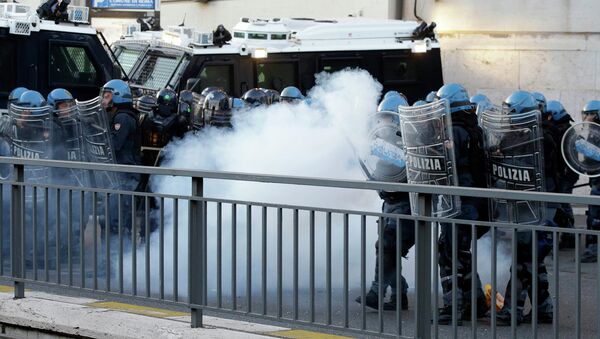 The protests began on Monday close to a temporary accommodation center for illegal migrants, where around 40 refugees from Africa are currently held. The situation escalated Tuesday evening as some protesters tried to enter the building and threw stones and petards at its windows. The protesters also set on fire a car parked nearby, as well as several garbage bins. The migrants responded by throwing objects from the building's windows.

Local police tried to stop the protesters by using the tear gas, injuring 12 people, including women and a media worker.

Italy faces serious problems with migration. Its Mediterranean island of Lampedusa is located just 70 miles from Tunisia, and is a popular stop for migrants aiming to reach Europe from north Africa. Many African refugees plan on moving onward to the United Kingdom and France, hoping to find jobs there, but in the end many of them remain in Italy. Thousands of refugees also come from war-torn Syria or poverty-stricken Eritrea.

Hundreds of people are rescued by the Italian Navy almost every month in the Mediterranean between Sicily and the Libyan and Tunisian coasts.

The total number of migrants who arrived in Italy since the start of 2014 exceeds 100,000 people. In 2013, 43,000 illegal migrants landed on Italian shores, according to the UN refugee agency UNHCR.