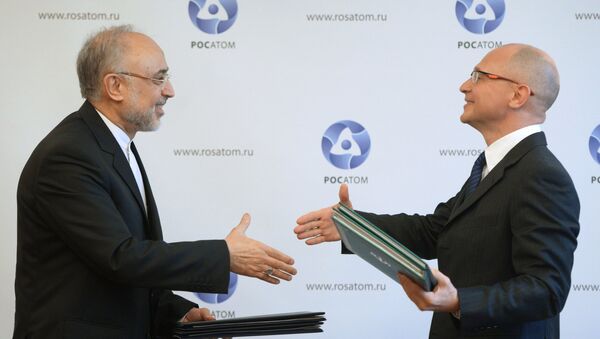 © Sputnik / Grigori Sisoev
/
Go to the photo bank
Subscribe
Russia and Iran signed on Tuesday a number of documents that will develop their cooperation in nuclear energy. The two countries plan to cooperate in the construction of eight energy reactor blocks for Iran.

The contract, which includes the availability to expand construction to four energy blocks, was signed in Moscow between Russia’s Atomstroyexport and the Nuclear Power Production and Development Company of Iran.

Russian Atomstroyexport and its contractors have managed to integrate Russian equipment into the construction, which was established several decades ago by the German Kraftwerk Union UG team, and have also used about 12 thousand tons of German equipment.

In September 2013, Iran took over from Russia the first unit of the power plant for a two-year period.

Russia and Iran signed on Tuesday a number of documents to expand their cooperation in the peaceful use of nuclear energy that will open the door to constructing eight new blocks using Russian technology in nuclear facilities, a RIA Novosti correspondent reported.

According to the signed protocol, Russia and Iran aim to cooperate in the construction of eight energy reactor blocks, including four at the Bushehr Nuclear Plant, using Russian technology. Nuclear fuel for the eight energy blocks will be provided by Russia and the spent fuel rods will be returned to Russia.

Earlier in September, Russian nuclear experts presented a project for the new Iranian nuclear power plant Bushehr-2 at a seminar in Tehran.

The first unit of the plant transferred operations to Iran in September 2013 with the final stage and commercial operations scheduled for 2015.

Russia's Nuclear Facility Construction in Iran to Be Under NPT, IAEA Safeguards

Iran’s new nuclear energy blocks to be constructed by Russia will be under the safegurads of the International Atomic Energy Agency and the Treaty on the Non-Proliferation of Nuclear Weapons, Russia’s Rosatom nuclear agency said Tuesday.

“The entire project of constructing nuclear energy blocks in Iran, including the delivery of equipment and fuel, will be under IAEA safeguards and in full compliance with the non-proliferation of nuclear materials just like with the construction of the Bushehr Nuclear Power Plant’s first block,” Rosatom said in a statement.

Iran's nuclear program is considered to be controversial by many countries, despite Iran's repeated claims that the program will be of a peaceful nature. The United States and a broad coalition of governments have imposed sanctions on Iran over the nuclear program.

“Within the framework of increasing Iran’s provisions of nuclear energy blocks designed by Russia, the partners plan to develop an economic strategy including the possibility of producing nuclear fuel elements in Iran that will be used for these energy blocks,” Rosatom said in a statement.

Earlier on Tuesday, Russia and Iran signed a number of documents to cooperate in the construction of eight energy reactor blocks, including four at the Bushehr Nuclear Power Plant, using Russian technology. Nuclear fuel for the eight energy blocks will be provided by Russia and the spent fuel rods will be returned to Russia.