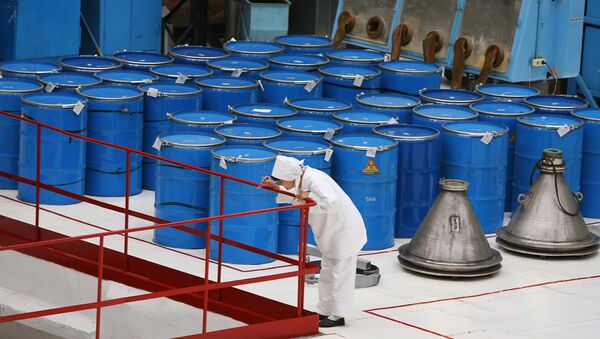 © Sputnik / Ruslan Krivobok
/
Go to the photo bank
Subscribe
US State Department spokesperson Jen Psaki announced that Iran stopped using the advanced IR-5 centrifuge for uranium processing, a controversial enrichment method reported by the International Atomic Energy Agency, which had raised US claims against it.

"We raised that [IR-5] issue with Iran as soon as the IAEA reported it, and it was resolved immediately. The Iranians have confirmed that they will not continue that activity as cited in the IAEA report, so it's been resolved," Psaki told journalists Monday.

Psaki said the United States "felt that it [Iran using the IR-5 centrifuge] was a violation of what the IAEA requirements were", but stressed that her statements do not imply that the practice was in violation of the November 2013 Iran nuclear deal.

The IAEA issued a report, saying that Iran was feeding natural uranium gas into the new-model IR-5 centrifuge on Friday, ahead of a new round of P5+1 talks with Tehran on the Iranian nuclear program scheduled to take place in Muscat, Oman, on Tuesday.

The United States and a broad coalition of governments have imposed sanctions on Iran over its controversial nuclear program, which Iran claims is of purely peaceful nature. Last January the United States agreed to provide limited sanctions relief if Iran froze its nuclear program. Since then, Iran has halted production and opened the door to international inspectors.