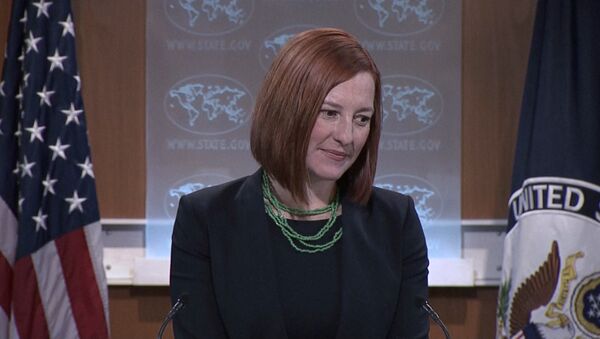 The US slams the movement of large military convoys in the Donetsk region and 'Russia's increased militarization of the Donbas region', but does not have any proof that the heavy artillery and tanks belong to Russia.

WASHINGTON, November 11 (Sputnik) – The United States denounces the movement of large military convoys in the Donetsk region, but does not have any proof that the heavy artillery and tanks belong to Russia, the US State Department has announced.

"We condemn Russia's increased militarization of the Donbas region," State Department spokesperson Jen Psaki said at a press briefing Monday, but when asked if she could offer any substantial evidence of the military equipment belonging to Russia, said that she "had no new information to provide".

The Special Monitoring Mission (SMM), deployed in Ukraine by the Organization for Security and Co-operation in Europe (OSCE), reported the movements of large military convoys of heavy weapons and tanks in Donbas (southeastern Ukraine) over the weekend.

Deputy Commander of the Donetsk People's Republic (DPR) militia Eduard Basurin told RIA Novosti on Sunday that the convoy, detected by the SMM belonged to independence supporters and was moved from its initial locations "for tactical reasons".

Since the start of the military conflict in eastern Ukraine, Kiev and the West have repeatedly accused Russia of intervening in the Ukrainian crisis, and even claimed that Moscow had sent troops and weapons to independence supporters in the Donetsk and Luhansk regions. Russia, in turn, has repeatedly denied these accusations.