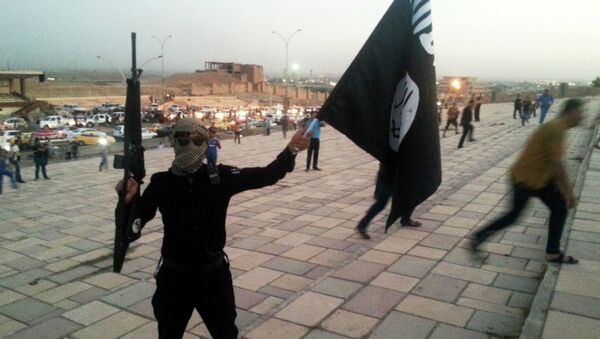 © REUTERS / Stringer
Subscribe
Ansar Beit al-Maqdis, the Islamist group behind numerous deadly attacks against the Egyptian security forces on the Sinai Peninsula, has pledged loyalty to the Islamic State.

“We announce our pledge of allegiance to the caliph Ibrahim Ibn Awad… to listen and obey,” ABM stated in a 9-minute recording, referring to Abu Bakr al-Baghdadi, the leader of the radical Sunni group, as quoted by AFP. It should be noted that Baghdadi’s fate remains unclear following US airstrikes against the group on Friday.

“We cannot confirm that Baghdadi was present when we struck the convoy near Mosul on Friday night,” said Major Curtis Kellogg, the spokesman of the US military’s Central Command, as quoted by Reuters. “We conducted two airstrikes near Al Qaim Friday evening destroying an ISIL armoured vehicle and two ISIL checkpoints but we’re not aware of another gathering of ISIL leaders in Al Qaim,” he added. The Islamic State is also known as ISIL or ISIS.

Ansar Beit al-Maqdis has long been rumored to consider supporting the Islamic State. Last week, on Monday, reports emerged that ABM finally pledged allegiance to the IS. “After entrusting God we decided to swear allegiance to the emir of the faithful Abu Bakr al-Baghdadi, caliph of the Muslims in Syria and Iraq and in other countries,” the statement said, as quoted by al-Arabiya. However, the next day Ansar Beit al-Maqdis dismissed these reports.

ABM appeared following the Arab Spring revolution of 2011, which resulted in the overthrow of Egypt’s former president Hosni Mubarak. It has launched numerous deadly attacks, targeting mainly the Egyptian security forces on the Sinai Peninsula. ABM has become increasingly active after Mohamed Morsi, the country’s first Islamist president, was removed from power in July 2013. The group claims it wants to avenge Muslims, who died in the subsequent crackdown on Morsi supporters.

The recording, if proved authentic, indicates that ABM has broken its ties with al-Qaeda. More significantly, it would also mean that the Islamic State group, currently controlling large swathes of land in Iraq and Syria, now has a presence in Egypt.

Egypt’s Interior Ministry spokesman doubts ABM’s announcement will radically affect the situation on the peninsula. “They are just different names for the same terrorists,” he told AFP. In late October, Egypt was forced to declare a three-month state of emergency in parts of the Sinai Peninsula after over 30 soldiers were killed in a suicide attack.