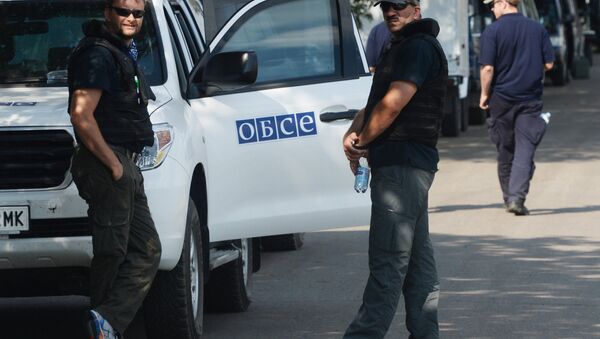 OSCE observers have detected two new convoys near Donetsk of 17 trucks each with artillery and multiple-launch rocket systems.

"East of Donetsk city… the SMM observed two convoys of 17 trucks each. They included artillery and multiple-launch rocket systems. The convoys were moving west," the report said.

"This was the second day in a row that the SMM observed convoys in the eastern outskirts and territories of Donetsk city," the report added.

On Saturday SMM detected the convoy of more than 40 trucks, heavy weaponry and tankers; nevertheless, as the SMM was on the move, it could not inspect the convoy and its contents.

Deputy commander of the Donetsk People's Republic militia Eduard Basurin told RIA Novosti on Sunday that the convoy detected by SMM belonged to the independence supporters and was moved from its initial locations "for tactical reasons".

The Special Monitoring Mission of the Organization for Security and Co-operation in Europe was deployed at Ukrainian government's request after the situation escalated in the country as its southeastern regions refused to recognize the legitimacy of the new government that came to power following a February coup. The monitors are meant to contribute to reducing tensions and fostering peace, stability and security in Ukraine and on the Russian-Ukrainian border.