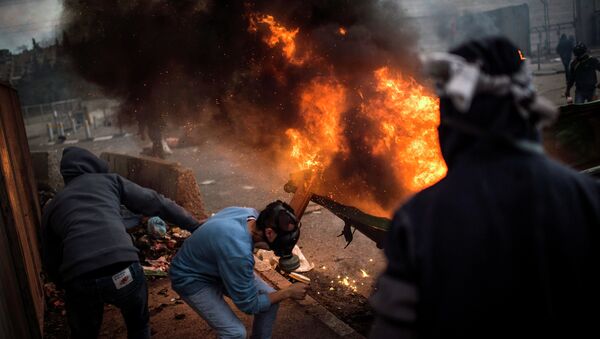 © Fotobank.ru/Getty Images
Subscribe
Israel is facing a nationwide Arab protest after police shot dead an attacker with a knife.

MOSCOW, November 9 (RIA Novosti) — Israeli police raised the security level Sunday, in response to mass Arab protesters who took to the streets yesterday after an Arab Israeli was shot dead by the police.

Israeli police are on the second-highest level of alert and Prime Minister Benjamin Netanyahu has warned of an increased governmental response if further unrest among the Arab population continues, reports the Associated Press.

Leaders of Arab Israeli community called for a commercial strike Sunday after a day of violent protests against the recent shooting of a 22-year-old Arab Israeli man who allegedly attacked policemen with a knife and was killed trying to escape. The Ministry of Justice has launched an official investigation into the incident after a video was published online showing a man shot at close range by Israeli police while stepping away from the their vehicle after using a knife to attack officers inside.

The incident occurred in the Arab-populated Israeli town of Kafar Kanna, 66 miles north of Jerusalem, where Jesus turned water to wine almost 2,000 years ago.

The mayor of the town already proclaimed the killing of Kheir Hamdan, the man in the video, an “execution”. Roughly 2,500 inhabitants of Kafar Kanna protested the incident yesterday, throwing stones and firebombs at the police. Arab protests have been prevalent in Jerusalem over the access to the Holy city, and the Kafar Kanna incident has only increased the hostilities.

At a weekly governmental meeting, Israeli Prime Minister Benjamin Netanyahu warned against street violence, having said that "Israel is a nation of law. Whoever violates the law will be punished severely. We will not tolerate disturbances and riots."

"I have instructed the Interior Minister to use all means, including evaluating the possibility of revoking the citizenship of those who call for the destruction of the State of Israel," Netanyahu added.

Clashes erupted Sunday in many Arab communities across the country, YnetNews report. In Kafar Kanna, dozens of protester threw rocks at the police and 17 were detained. In Tel Aviv and Haifa, dozens of Arab students protested.

"Netanyahu threatened to revoke our citizenship and we are telling him from here that he cannot deter us," one of the rioters told Ynet. "You and your police are the rioters, not us. We'll continue our struggle until the policemen who murdered Khair Hamdan are punished."

Some protesters have been reported using Molotov cocktails and other types of deadly weapons.

The Arabs have proclaimed the late Khair Hamdan a ‘Shakhid’ (a Muslim martyr), saying that "in spirit and in blood we will redeem the martyrs." Most of protesters belong to different Islamic movements, and some of them reported as chanting "Israel is a terror state."

Police are preparing for escalating Arab violence. "Over 1200 policemen will be deployed in Arab towns and cities today. We're all ready for any unusual incidents. The situation is not calm. We're doing everything to take control of rioting, if there are any," a Sunday morning statement from the Israeli police read.

Sectarian tensions escalated last month, when Israeli authorities restricted access to the al-Aqsa mosque in Jerusalem, the third most important holy site in Islam. This occurred after two Arabs drove their cars into crowds, killing Israeli civilians in October.

More than 20% of Israelis are Arabs, with roughly 4.5 million living in the Gaza Strip, West Bank and east Jerusalem, captured by Israeli military in 1967 during the Six-Day War.