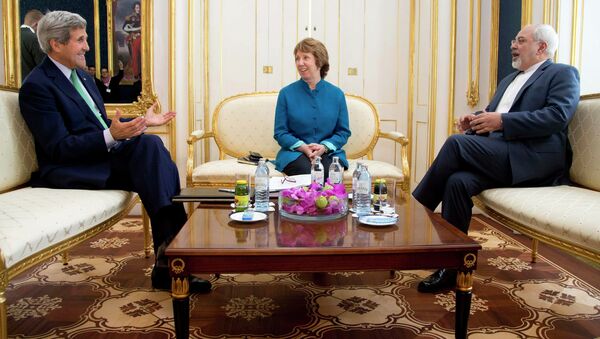 US Secretary of State, EU’s diplomatic representative and Iran’s FM are meeting in Oman for another stage of nuclear talks.

The new round of talks is dedicated to accelerating a consensus deal, which is anticipated to be concluded on 24 November, as reported by Reuters. The trilateral meeting in Omani capital, Muscat, will last for two days and concentrate around the principal disagreements over the controversial Iranian nuclear program. The general course of negotiations is underway between the so-called P5+1 group of nations, which includes Russia, China, the US, the UK, France and Germany.

A new full-scale P5+1 round of talks is set to commence on November 18 in Vienna. The participants of the talks are intending to strike a deal before the self-imposed deadline of November 24. The anticipated agreement between the world’s five leading nations and Iran aims to curtail Iran’s uranium enrichment efforts for alleged military use in return for significant easing of international sanctions, which currently severely limits Iranian oil exports, damaging the nation’s economy.

Secretary of State John Kerry previously rebuffed media allegations that deemed the atmosphere of urgency surrounding the looming Iran nuclear deal as connected with Islamic State and other international threats to the West.

"The nuclear negotiations are on their own, they're standing separate from anything else, and no discussion has ever taken place about linking one thing to another," Kerry said, as quoted by the Hill.

Iranian diplomats, in turn, said that the nuclear deal could be concluded before the November 24 deadline.

“No one wants to return to the way things were before the Geneva Agreement. That would be too risky a scenario,” Abbas Araghchi, Iran’s deputy FM said, as quoted by IRNA, referring to an interim agreement, concluded by Iran and the West in Geneva on November 24, 2013. “Both sides are aware of this, which is why I think a deal is within reach. We are serious and I can see the same resolve on the other side,” Araghchi added.

Just before the start of today’s meeting with Kerry and Ashton, Zarif spoke with the media, having said that there is still many differences between the stances taken by Iran and the West. The sides cannot agree upon the scale to which Iran will be allowed to continue its nuclear enrichment program, or on a concrete formula for the gradual easing of international sanctions against Iran, Tasnim News Agency said.