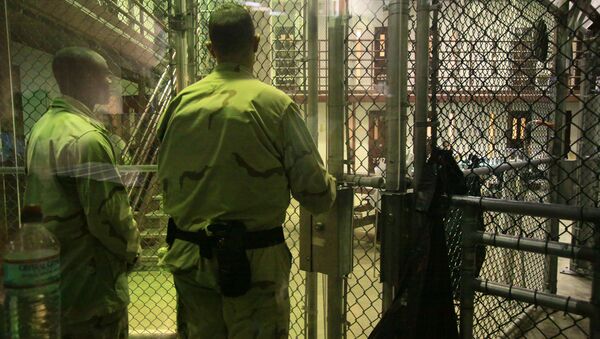 © Sputnik / Denis Voroshilov
Subscribe
In the memorandum opinion released Friday a federal judge in Washington D.C. has ruled against a Guantanamo inmate's request to change the manner in which detainees are being force-fed at the notorious US detention camp in the Guantanamo Bay, Cuba.

MOSCOW, November 8 (RIA Novosti) — A federal judge in Washington D.C. has ruled against a Guantanamo inmate's request to change the manner in which detainees are being force-fed at the notorious US detention camp in the Guantanamo Bay, Cuba, the court said in a memorandum opinion.

The document, released Friday by Judge Gladys Kessler, said that the "failure to show any irreparable harm is… grounds for refusing to issue a preliminary injunction."

It said further that Syrian inmate Abu Wael Dhiab, who filed the petition, had "failed to identify any constitutional right or rights offended by the challenged practices. Thus, in effect, he is challenging the day to day procedures that the medical staff at Guantanamo Bay use to carry out their mission, rather than making a constitutional challenge."

Dhiab's case turned the spotlight on force-feeding practice at the US military prison after the court held public testimonial hearings for three days in October, against the wishes of the US Department of Justice (DoJ) that sought to keep classified videotapes secret.

The footage showed hunger-striking detainees strapped in a restraint chair before they had feeding tubes pushed into their stomachs through nostrils. The Syrian prisoner, who has been cleared for release back in 2009, said the procedure was both painful and humiliating.

It was previously suggested that force feeding was used to punish those protesting against indefinite detentions.

"The Government produced highly credible evidence that enteral feeding is rarely painful," the document argued, while taking notice of the medical records that said the prisoner had "complained of pain and nasal bleeding because of the tube insertion."

It also referred to the use of the restraint chair as a "standard operating procedure at Guantanamo Bay."

"The Court concludes that the Petitioner's Application for a Preliminary Injunction must be denied because he has failed to satisfy the 'deliberate indifference' standard of proof," the document said.

In conclusion, Kessler described Dhiab as a "very sick, depressed, and desperate man" and hoped his release "will take place shortly."

DoJ has until mid-November to decide if it is going to appeal the court's ruling to disclose the force-feeding videotapes, or if it should make them public, according to the Guardian.