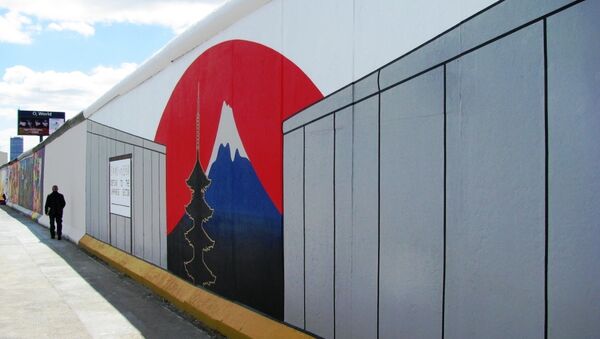 MOSCOW, November 8 (RIA Novosti) — On 9 November, 2014, Germany is going to commemorate the 25th anniversary of the fall of the Berlin Wall, representing a turning point in Germany’s history and symbolizing the reunification of the country. The barrier between the two parts of the country had been lifted to the joy of many Germans, but the country itself can still not be considered unified, especially in terms of economic development and living standards, the Telegraph reports.

Though a quarter century has passed since the crucial historic event, German regions still suffer from internal disparities. Former eastern regions have slower economic dynamics and weaker industrial capacities in comparison to the western parts of the country, as stated by the Halle Institute for Economic Research. Germans living in Leipzig or Magdeburg have lower salaries than their compatriots working in Frankfurt or Düsseldorf; those who wish to invest in business, predominantly choose enterprises in Baden-Württemberg or Nordrhein-Westfalen, rather than in Thüringen or Sachsen.

The situation is worsened by the fact that many young people migrate from eastern parts of the country to the west in search of better job offers and higher wages. German eastern states have a relatively high unemployment rate of 9.7%, compared to the country’s average of 5.4%, according to the Telegraph.

Germany’s economic giants are mostly headquartered in the West, as the economic climate there is much more prosperous. For instance, German enterprises DaimlerChrysler, Siemens and Deutsche Bank, listed among the top German companies by Forbes, have their main offices in Stuttgart, Munich and Frankfurt, which are among the nation’s wealthiest cities.

Thus, migration volumes and economic disparities show that Germany still has a lot to do in order to unify its regions. However, "no country is completely balanced" and economic differences are present in any nation, as was rightly stated by Jörg Zeuner, head economist at KfW Group.

"The new states have accomplished a historic economic upswing," Zeuner said, adding that “per capita growth in the last 25 years has paralleled that of post-war Germany's economic miracle." In support of his words, the latest estimates show that per capita income in eastern Germany had amounted to 17,700 euros, which constitute 84% of that in the western regions.