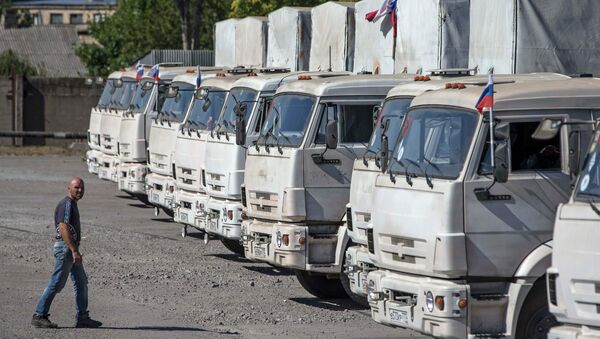 "The EMERCOM of Russia plans to put together a new batch of humanitarian cargo. A date for its [aid convoy's] departure will be announced separately," the ministry's Eduard Chizhikov said.

Since August, Russia has sent six aid convoys to eastern Ukraine, which has been suffering from a humanitarian crisis following the start of Kiev's military operation in April.

Earlier in the day, aid workers at the ministry's emergency center in Noginsk, in western Russia, marked the homecoming of the previous aid convoy, which brought some 2,000 tons of aid cargo last week to the stricken regions of Donetsk and Luhansk in the adjacent eastern Ukraine.

"It included food, medicine and building materials which will help people get more comfortable ahead of the coming winter," Chizhikov told journalists.

Alexander Lekomtsev, the man in charge of the convoy, reported the successful end of the mission, saying the convoy had faced no obstacles on the border. "We were greeted very warmly along the way," he added.

The latest humanitarian convoy of 20 trucks delivered more than 100 tons of aid to the Donetsk and Luhansk regions on Tuesday and returned to Russia the same day. A total of six convoys traveled to eastern Ukraine between October 23 and November 4, bringing more than 7,000 tons of aid, which included food, medicine, power generators, warm clothes, fuel and drinking water.